Regarding the referendum he has declared for Sunday, late last night Greek PM Alexis Tsipras gave an interview on national television. He said the process of democracy should not be impeded and that Greeks had a right to vote on their future (Yes, we do.) Then he explained that a NO vote would give him greater bargaining powers and that our interlocutors had no choice but to find a solution because Greece, due to its history, geopolitical importance etc., could not possibly be kicked out of Europe.

He’s still expecting someone else to blink, then.

Today, Mr. Tsipras left for Brussels with a new proposal, which seems already to have been rejected without discussion. The Germans have refused to discuss anything before the results of the referendum. However, by midnight, Greece will probably have been declared bankrupt. Everything’s on the boil.

One must realize that, historically, this is the first time since the war that a European country will be officially bankrupt. The elderly have been queuing all day outside closed banks trying to withdraw their pensions from ATM machines. Unbelievable scenes for our century.

It is by now obvious that the economic program foisted on Greece by the ‘troika’ (the European Commission, European Central Bank, and the IMF) has been abysmally disastrous. Of course, they have consistently refused to acknowledge this, or learn from their mistakes. Whatever the faults of the Greeks and their governments, surely they do not deserve this. Let him who casts the first stone, etc… Even the Germans were not left to rot after the war, and we haven’t exactly been going around killing people.

In spite of all this, people in their thousands have flooded into Syntagma Square in front of the House of Parliament, demonstrating for Europe. And the Euro. Whatever their political affiliation, these people are planning to vote YES on Sunday. 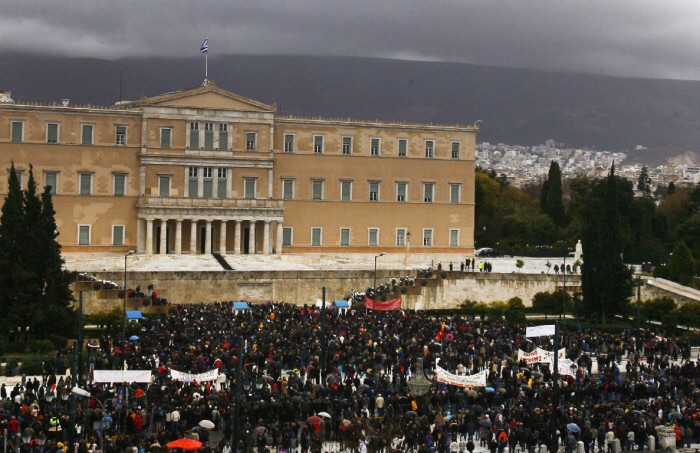 As you can see in the photograph, the sky is dark. As we speak, rain is pouring down. A sign from Zeus? But what does it all mean? Even the Oracle of Delphi, obscure at the best of times, could not make a prediction about what will happen now.

One thought on “Breaking News”