“We are at the turn of the 19th Century. Napoleon is pondering the risk of invading England. He decides that it is not a very good idea. Instead he invades Egypt, wresting it from Turkish authority. The Turks don’t appreciate this at all. They break off diplomatic relations with France. They also declare war. Britain decides that this is a dandy time to appoint an Ambassador to Turkey.

Enter Lord Elgin. It is he who gets the job. He has just married pretty Mary Nisbett and is finishing his fine country house. Its architect tells him of the wonders of Greek architecture and sculptures, and suggests it would be a marvellous idea to make plaster casts of the actual objects in Athens. “Marvellous, indeed,” says Elgin. He sets about organising a group of people who could make architectural drawings, headed by a worthy painter, who turns out to be Giovanni Lusieri, an Italian painter.[…]

Elgin’s staff of artists arrive in Athens. To control Athens the Turks have assigned two governors, one civil, the other military. Much has been said and continues to be said of what little concern the Turks had for the Acropolis treasures. Yet, it took six months for the Elgin staff to be allowed access. But they worked it out; five pounds a visit into the palm of the military governor. This inaugurated a procedure of bribery and corruption of officials that was not to stop until the marbles were packed and shipped to England.

Yet, when scaffolding was erected and moulds were ready to be made, suddenly came rumours of French preparation for military action. The Turkish governor ordered the Elgin staff down from the Acropolis. Five pounds a visit or not, access to the Acropolis was verboten . There was only one way to get back up there again; for Lord Elgin to use his influence with the Sultan in Constantinople, to obtain a document, called a firman , ordering the Athens authorities to permit the work to go on.[…]

No sooner was the firman delivered to Athens, than a feverish, terrifying assault is made upon an edifice that, until today, many consider the purest, the most beautiful of human creation…”

The above text is part of a long speech made by Melina Merkouri – a beautiful and powerful woman, a well-known singer, actress and politician who, at that time, had been appointed minister of culture – to the Oxford Union in 1986. The topic on debate was the return of the Parthenon Marbles to Greece. She ended her speech thus:

We are ready to say that we rule the entire Elgin enterprise as irrelevant to the present. We say to the British government: you have kept those sculptures for almost two centuries. You have cared for them as well as you could, for which we thank you. But now in the name of fairness and morality, please give them back. I sincerely believe that such a gesture from Great Britain would ever honour your name.”

The Parthenon Marbles, designed and executed by the sculptor Pheidias to adorn the Parthenon, are perhaps the greatest of all classical sculptures. When, in 1801, Lord Elgin, then ambassador to the Turkish government, had chunks of the frieze sawn off and shipped to England, these were seized by Parliament and sold to the British Museum to help pay off Elgin’s debts.

Greece has sought the return of the sculptures ever since victory in the War of Independence in 1832. During the war, Greek fighters even gave bullets to Ottoman soldiers besieged on the Acropolis because they were damaging the Parthenon by removing lead fittings to make ammunition after running out. However, the British Museum has so far refused to consider the request, on the grounds that the marbles had been legally acquired. Greece does not accept this, arguing that the firman giving Lord Elgin permission to take the marbles was never actually produced, and that in any case, it was issued by an occupying force.

The British Museum also maintained that Athens did not possess a fitting place to house the marbles. It is true that until recently the Acropolis museum was a small and cramped place (I remember the boredom of tramping around it on school trips – dusty statues lined against the walls) but the fact is that the marbles which remained in Athens are in much better shape today than those in London, having been restored by cutting-edge laser technology. Meanwhile, the ones in the custody of the British Museum have suffered both deliberate and accidental damage, a fact acknowledged by Dr Ian Jenkins, chief curator of the museum.

As for lack of fitting space, this argument has been emphatically trumped by the opening in 2009 of the New Acropolis Museum whose innovative design, the work of Swiss-born architect Bernard Tschumi, offers a sweeping 360-degree view of the Acropolis. In a Times article dated August 27, the museum was described as “one of the most beautiful exhibition spaces in modern architecture”.

While government is still prevaricating, the British people are more relaxed about returning the marbles (today, a majority supports reunification.)

In 1983, in response to Melina Merkouri’s appeal for repatriation of the marbles, a campaigning body called the British Committee for the Reunification of the Parthenon Marbles ­was set up. Eleni Cubitt, its secretary, says: “The Parthenon Sculptures deserve to be housed in the New Acropolis Museum. Currently they are a fragmented piece of art, yet as one significant piece, visitors will be able to see the whole as it ought to be seen, in context, at the foot of the Acropolis itself.”

The English writer Christopher Hitchens also joined the fight in 1983, by writing an article on the subject for the Spectator. In 1987 he wrote his polemic, The Elgin Marbles, now retitled The Parthenon Marbles: The Case for Reunification. Hitchens insisted the Greeks have “a natural right” to the sculptures, and that they belong on the hill of the Acropolis – “in that light, in that air. Pentelic marble does not occur in the UK.”

While both Mercouri and Hitchens have since died, the battle goes on, under the benign leadership of the Acropolis museum director, Professor Demetrios Padermalis.
In a recent article in the Kathimerini daily paper, Padermalis explains that his strategy is strictly scientific, avoiding fanfare, and instead using low key discussions and thoughtful reasoning. He maintains a scientific dialogue with the British Museum, in keeping with his credo that the Acropolis Museum is before all a place of learning. Of course, the matter of the return of the marbles has always had a political dimension; in 2014 the Greek government hired the high-profile human rights lawyer Amal Clooney and her colleagues to secure the return of the Parthenon Marbles – a momentous mission. However, they have since backed off, fearing a negative decision by the courts would permanently wreck Athens’ chances of having the marbles returned. Financial considerations also played a part in this decision, given the country is in an acute state of crisis.

Meanwhile, in 2008, in a gesture of goodwill, Italy returned a fragment, a 14-by-13-inch artifact consisting of a foot and part of a dress hem from a sculpture of Aphrodite, the goddess of love. The 2,500-year-old section of marble was presented to the Greek government by Italy’s president, Giorgio Napolitano.This is not the first piece from the Parthenon sculptures to be returned, since another, smaller piece was offered by Heidelberg University two years previously.
Padermalis remarks that politics are not within the museum’s sphere of influence. The feeling I got from reading the Kathimerini article is that Padermalis disapproves of the bombastic tones the government used in this matter, believing that this does not help the cause. He prefers the viewer – the millions of visitors coming to the museum – to see for himself the esthetic problems caused by the fragmentation of the marbles. The unity of a wonderful work of art has been broken, by being divided between Athens and London.

Padermalis uses concrete examples to reinforce his point of view. In one part of the frieze, a centaur is grabbing a Lapith woman by the waist, in a violent scene of rape. But the woman’s foot is in the British museum, where a visitor can never comprehend, by seeing this lone foot, the dramatic tension of this scene. In another part, Kekrops, the first mythical king of Athens, had a snake by his feet, to symbolise the fact that he was indigenous to Athens (the snake was a guardian of the natives). But the snake is in London – another fragmented scene, which thus loses much of its impact.

The new Acropolis museum is a magical place, meriting a trip to Athens just for its own sake. It is full of light and wonderful perspectives. Walking in, one finds oneself stepping onto a glass floor, through which can be seen the ruins of the ancient city of Athens. There are treasures on view at every step, and the top floor is an exact replica in shape and size of the Parthenon so that the metopes can be seen as close to their original form as possible. The walls are glass, through which the Parthenon can be admired, a short distance away. Light streams in, making for an unforgettable experience.

I have had the pleasure and of meeting professor Padermalis, and his enthusiasm and passion for his work are infectious. He never tires of showing people around and explaining his latest projects, one of which is reconstituting the colors of the statues (on replicas, not on the original statues!) Minute quantities of paint remain on the statues, enabling a close approximation, which appears shockingly garish to the modern viewer, who is used to the beauty of the bare marble.

The case is ongoing: this year, a cross-party group of British MPs has launched a fresh bid to return the marbles to Greece on the 200th anniversary of the British Government’s decision to buy them — a move that campaigners said could help the UK secure a better deal during the Brexit talks with the EU. But the matter also provokes an interesting debate: should all works of art be returned to their country of origin? Would this cause  a huge upheaval in major museums? Personally, I don’t think one can generalize – it should be a case by case matter, depending on the rarity of the work, the situation in the home country (Palmyra comes to mind, but could Palmyra have been transported elsewhere?) and other factors.

International organizations can and are helping with the preservation of monuments where possible. Casts and copies can be made. Also, in some cases, such as Greek and Roman antiquities, there are so many of them that more could foreseeable be loaned to museums around the world rather than stay unseen in storerooms. 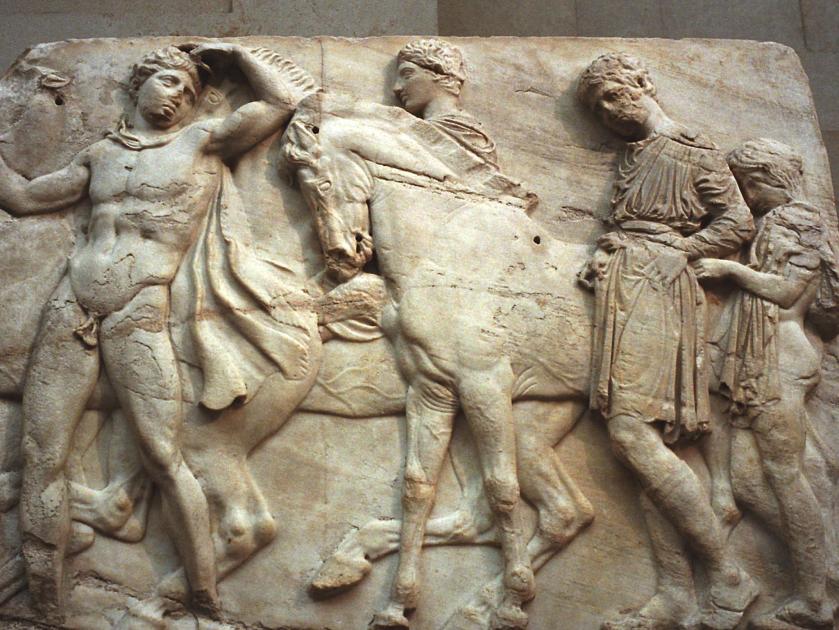 31 thoughts on “Reclaiming the Parthenon marbles”