My apologies for my protracted absence, due to the fact that I have been afflicted by a total lack of inspiration. Winter blues? Procrastination? Terminal laziness? Call it what you will. I have been nursing a broken ankle, not the result of skiing down a black piste or parachuting into the Gobi desert, which at least would have contained some element of glory, but boringly achieved, on a cold and frosty morning before Christmas,  just outside the house.

As such I’ve been confined to the sofa and unable to visit any exciting exhibitions, or take any trips. And the news, as usual, is horrendous.

For a while, Ι debated whether to write about the appalling developments in the refugee crisis, but just could not bear to. I have been posting about this since 2015, and it just seems to get worse and worse, with no end in sight. Anyway, nobody needs my take on this issue, since we are bombarded with articles about it in the media every single day.
As for the American campaign, it just fills me with ennui—and amazement that a country of so many millions has failed to produce anyone more inspiring. I miss the Obamas. Whatever one’s political convictions or criticism of the man’s policies, he was young, vibrant, intelligent, and possessed of a normal family unafflicted by the sleazy/tragic luggage that seems to weigh down everyone else. The worst journalists could dig up about him was that he was not American (seriously?) and that he changed his name from Barry (boring) to Barack (interesting). Shock! Oh, and his daughter Malia was once photographed smoking. Re-shock! Nowadays I find every candidate is too old, too rich, too corrupt, too boring, too bitter, and some are all of the above.
Moving on from these non PC remarks, what else is there to discuss but the surreal panic about the coronavirus epidemic. No comment; I’m sure everyone’s had their fill of this.

Despite all this whining, I have not been totally idle. I enrolled in a short but interesting online course on memoir writing (courtesy of Curtis Brown Creative), and did the appropriate homework. I’ve also been doing a lot of reading, keeping a few books on the go. One of these is Mazower’s Inside Hitler’s Greece, which dovetailed with my interest in the memoir course. It’s beautifully researched and written, but the content is so horrific that I can only read one chapter at a time. It has, however, given me interesting insight into the times my parents and their generation lived through.
The second book is Shnayerson’s Boom, about the rise of the contemporary art market. This is easy reading, being amusing and full of gossipy titbits, but also slow going since I feel compelled to Google many of the artists and dealers mentioned in it. Finally a friend brought me Georgina Howel’s Queen of the Desert, a fascinating biography of Gertrude Bell—the British explorer who helped to found modern Iraq—which I’m now devouring, having previously gone through a collection of essays by Nora Ephron (always amusing), a book of short stories by Alice Munro, and a murder mystery set in France. 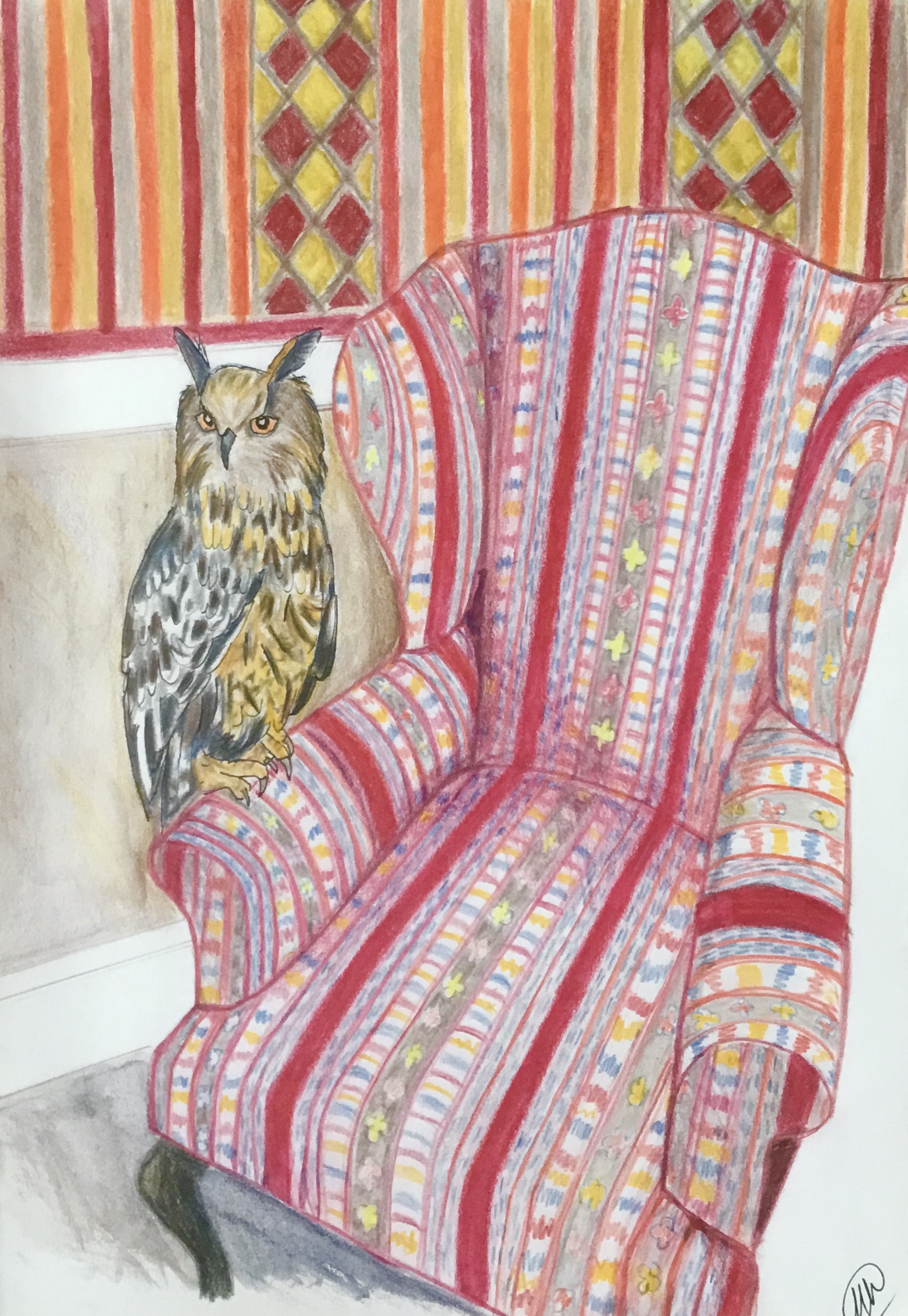 On the artistic front, I could only manage some small sketches and drawings such as the owl above, done on my lap with colored pencils. Once I could sit at the table with my cast on a stool, I played around with some gold leaf, and lately I have been experimenting with monotypes, of which more in another post.
Hopefully, now the cast is off and I’m hobbling around and paying visits to the physiotherapist, I will get my mojo back and regale you with more interesting posts.