Life under the present conditions has become very monotonous. It’s impossible to plan anything and, although I’m never bored—having access to books, paint and nature helps—I must confess I find it hard to come upon interesting subjects to write about. There are no cultural outings or trips to be had, and I do miss dinner with friends in a restaurant (oh, the luxury!) and occasional evenings at the cinema, theatre or a concert.

Books aside, we’ve been obliged to fall back on Netflix for entertainment and the really good films or series are few and far between. Thus I have found myself watching the extremely popular series, Brigerton, which has managed to accrue over 80 million viewers—and one can see why: a steamy romance set in Regency England, full of family secrets and racy subplots. Pure froth and escapism, just right for this dreary winter.
Those of you who have not watched this extravaganza, or are planning to watch it and want to avoid spoilers, switch your laptops off now. Anyone else who feels like a trivia-fest, feel free to weigh in. 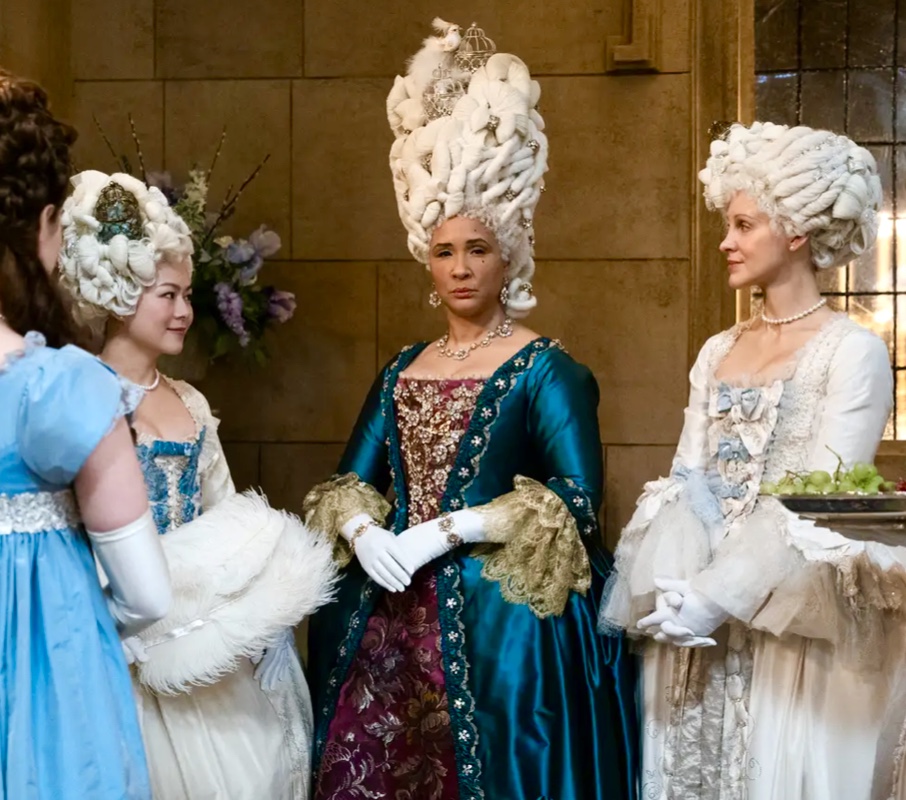 I greatly enjoyed the tongue-in-cheek look at the racially-mixed high society, the—at least partial—disregard for historical fact, the anachronistic musical scores, the petulant character and gravity-defying wigs of the Queen (see above), the lovely settings, the exquisite clothes and especially the beautifully choreographed ballroom scenes.
However, even more gravity-defying than the Queen’s wigs was the plot, or absence of it: instead of being a skeleton on which to hang the different parts of the story, it seemed to have been cobbled together with the sole purpose of taking the viewer from one set piece to another, necessitating a major suspense of disbelief.

Why would the Queen be so determined that her nephew, who surely must have had a bevy of princesses and duchesses at his disposal, should marry the daughter of a minor lord?
Why was the Duke of Hastings’s vow to his father such a big secret? Couldn’t Daphne have asked her mother to find out, or asked Lady Danbury directly? (Well, I suppose that if she had, the story would have been over by Episode 2…)
What happened to the Prince’s necklace? Daphne can hardly have just dumped it in the shrubbery.
How does Penelope, who is meant to be penniless and, surely, chaperoned, have access to a printing press and a horse and carriage in which she is seen gallivanting by herself in the middle of the night? (spoiler alert, in the ultimate twist she is revealed to be gossip columnist Lady Whistledown).
How does a ball held outdoors, which ends with the guests being soaked by a sudden shower, have chandeliers hanging above the dancers? (See below)

And what the hell is ratafia? (I admit I looked this one up—it is a kind of sweet wine, much favored by the ladies at the time. Also, I should have known this: my mother was a fan of the Georgette Heyer books, which I devoured at the age of around twelve—too long ago to remember…) 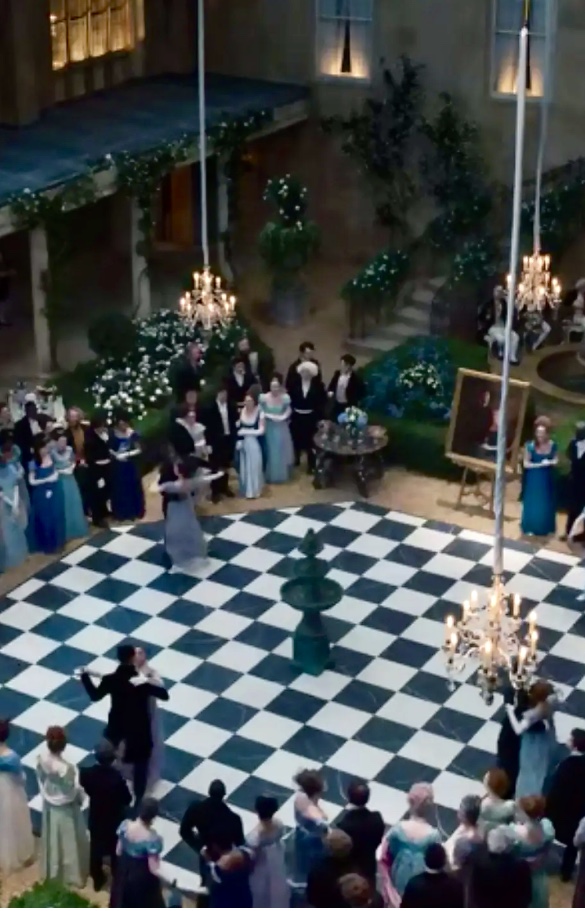 Lastly, all the male characters strut around in calf length riding boots, which seem to just …vanish (melt away?) when they decide to get naked with their love interest. In my experience, however, this kind of boot takes ages to pull off, or necessitates a boot-pull or a third party to help. That’s why modern riding boots have a zipper down the back of the leg…

I can hear you saying, who cares? No one, it’s just a bit of fun. But please, Shondaland, pull yourself , and the plot, together  before season 2!

And just so you don’t think I’ve gone completely daft, I have two new recommendations for you: I greatly enjoyed Girl, Woman, Other by Booker Prize winner Bernadine Evaristo—a very shrewd look at human relationships via some avant-garde writing. Also a quietly elegant film called The Dig, about the pre-war archaeological discoveries at Sutton Hoo in Suffolk, starring Carey Mulligan, Ralph Fiennes and Lily James (new on Netflix).

25 thoughts on “Let us talk of something frivolous”