In a surprising move, Adam Szymczyk, Documenta’s Artistic Director, transplanted half this year’s exhibition to Athens, where it is sprawled over 40 venues, showing 160-odd artists, with the working title ‘Learning from Athens’. Documenta is an exhibition of contemporary art which takes place every five years in Kassel, Germany. It was founded by artist, teacher and curator Arnold Bode in 1955, in an attempt to bring Germany up to speed with modern art.

Here in Athens, the heart of the exhibition resides in the large available spaces—the Athens School of Fine Arts, Benaki Museum Pireos Street Annexe, the former Athens Conservatoire, and the EMST Contemporary Art Museum which, due to government mismanagement, has only just opened after years of delays. But the rest of it is spread around the many small galleries about town.
The program also includes a radio station that broadcasts 28 commissioned sound pieces in multiple formats, art films screened on Greek television, a vibrant education program, and a jam-packed schedule of live performances. 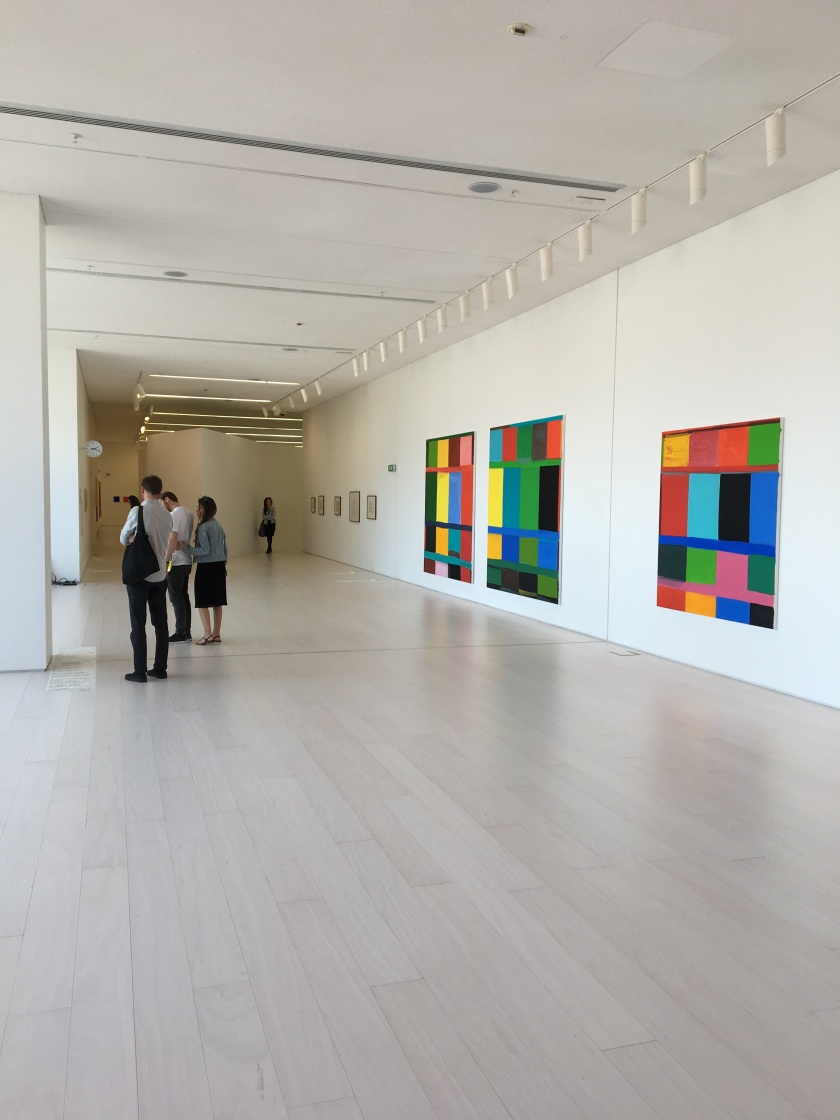 It was difficult to know what to tackle first, so we decided to start with the National Museum of Contemporary Art (EMST), which is a converted beer factory, and thus an interesting space in itself. 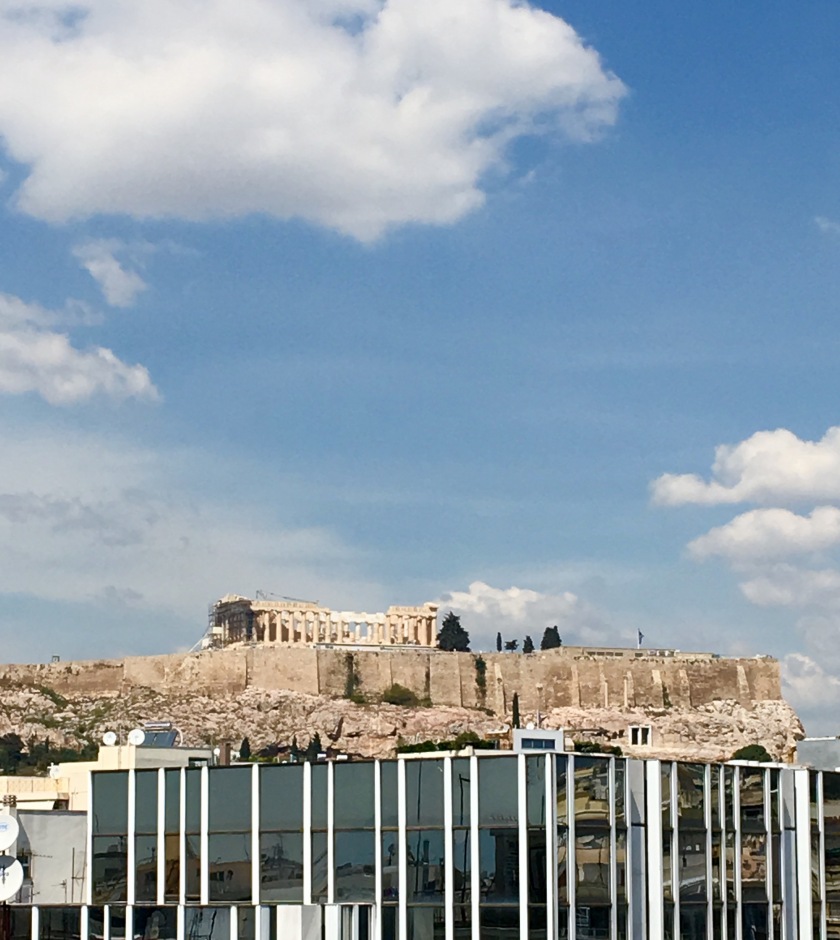 The building does not disappoint – it has been beautifully converted, provides an amazing background to showcase art, and has stunning views on the Acropolis, Mount Lycabettus, and the Philopappos hill.

The art itself, however, and although it did include some stunning pieces, left me somewhat underwhelmed. There were a number of very plain sketches which would have been better placed on Instagram, and installations which, while being creative and sometimes original, inevitably brought to mind the question: This is clever/imaginative/fun, but is it art? 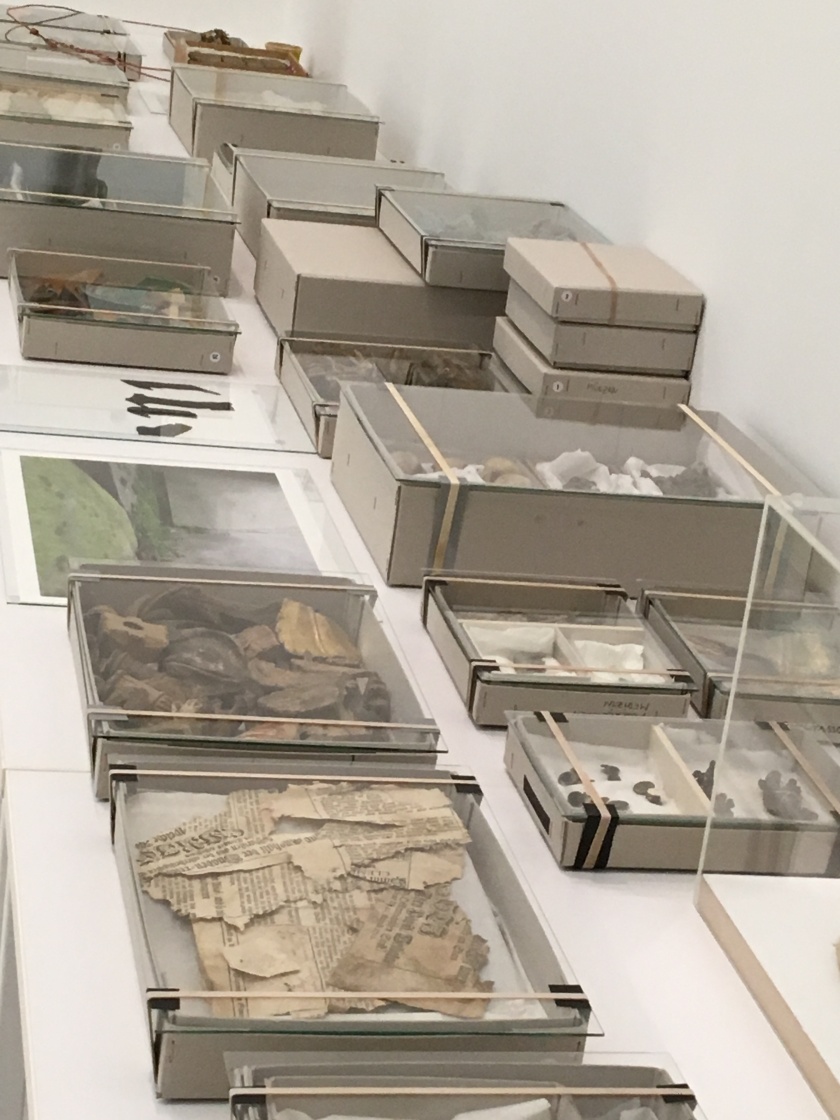 Austrian artist Lois Weinberger had packed old objects  ‘excavated’ from under  the Weinberger family’s old farmhouse floorboards – animal skulls, broken crockery,  bits of torn paper, scraps of wood – into cardboard boxed with plexiglass tops. There was even a line of old shoes. 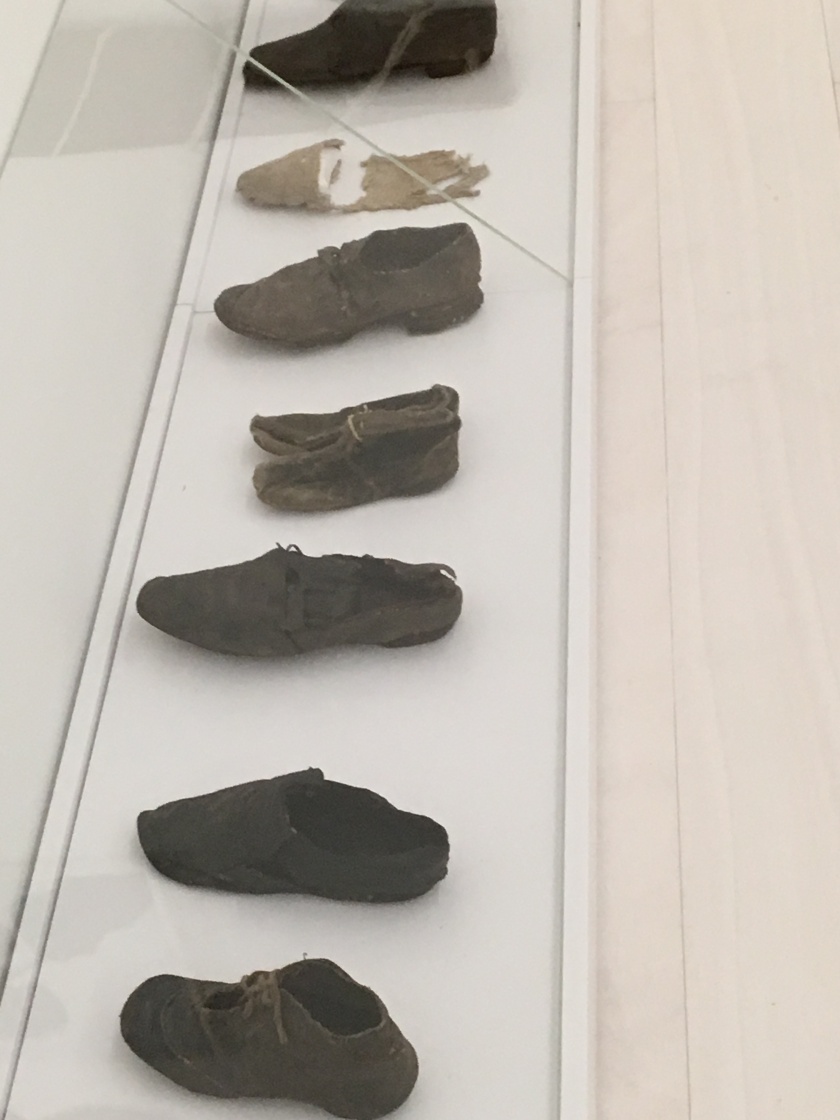 Strangely, the labels for the whole exhibition were located on the floor – they were just work titles on paper and handwritten artist’ names on small, rectangular blocks of marble that looked like paperweight (apparently a number have already disappeared – perhaps purloined as souvenirs). 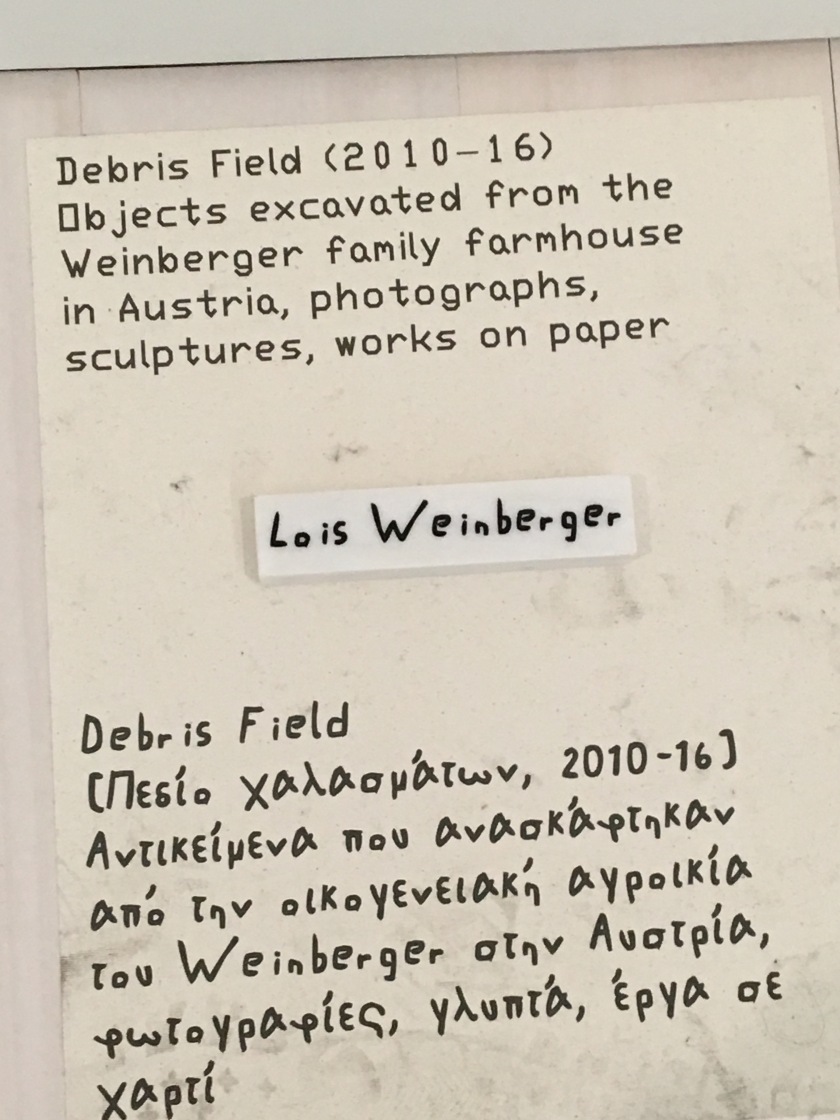 Another installation comprised a few desks strewn haphazardly in an empty space, as if an office had been abandoned in a hurry. On them were objects described on a list: i.e.  ‘a piece of A4 paper.’ 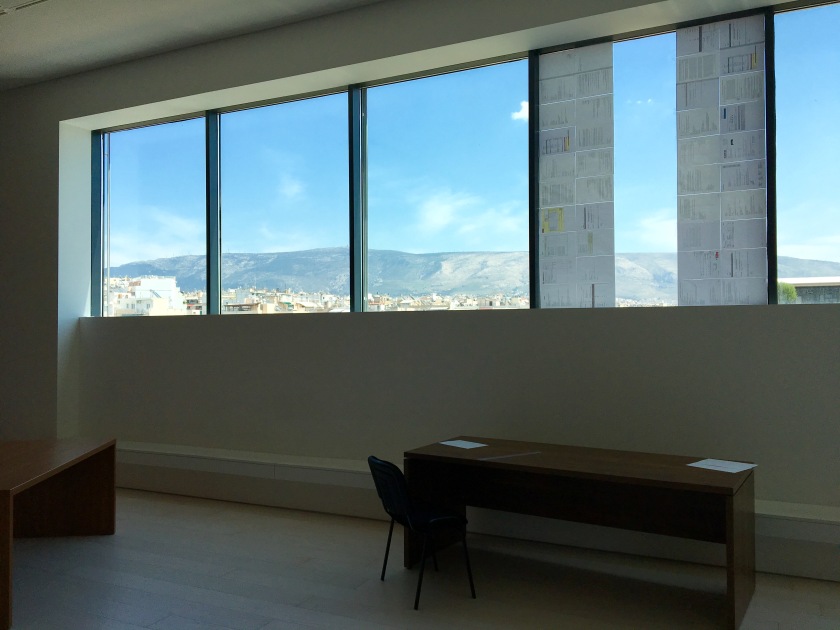 Art is very subjective and encompasses a wide range of creativity, yet there are still some some things I don’t get – but perhaps there is nothing to get. Just sayin’. The most creative part here, it seems to me, has been getting people to believe this is worthy of a place in Documenta. 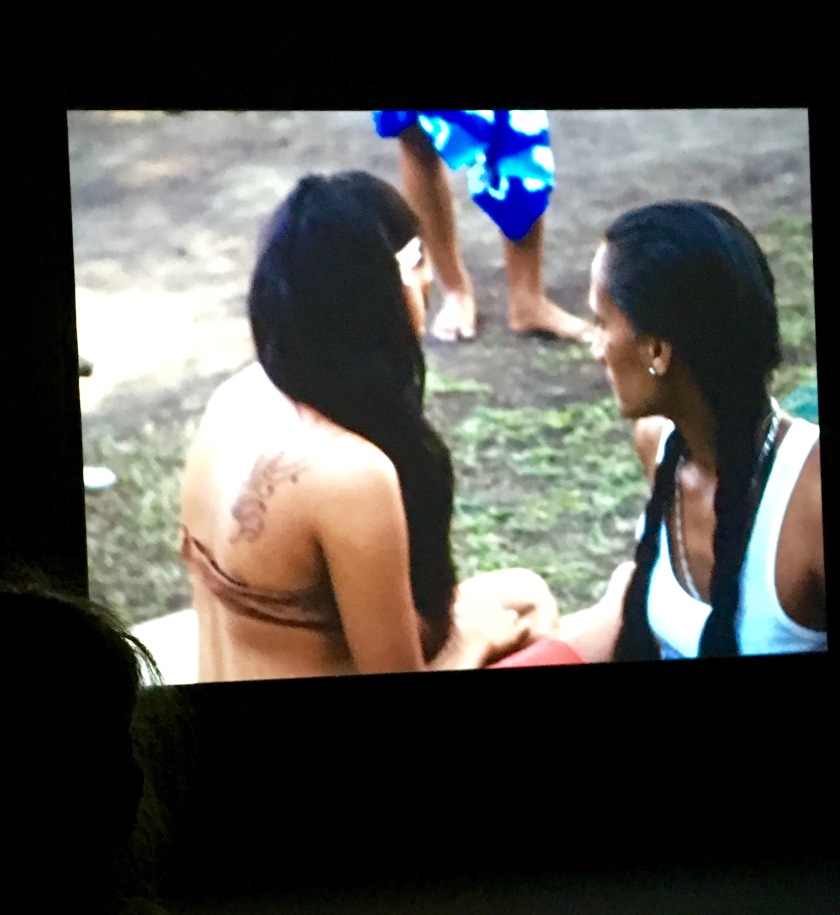 Moving on, among the video installations was one I found engrossing, from the collaboration of artists Nashashib and Skaer – a group of women and children in a house and courtyard, complete with dogs and chickens – which revisited Gaugin’s images of Tahitian women. Another, called ’15 hours’, by Chinese filmmaker Wang Bing, showed the repetitive work in a Chinese sweatshop – and there was an unbearable one, by Iranian director Forough Ferrokhzad. Called ‘The House is Black’, it documented life in a leper colony. I could only watch a tiny bit – in fact, I’ve noticed that visitors seldom have the patience to watch the whole of a video installation, which, in some instances, is probable a shame.

One aspect of the exhibition I liked was the variety of artists represented, from all over the world. Many from Eastern Europe, and some from unusual destinations – artists from as far away as Mongolia, or belonging to the Sami people from the Arctic regions of Norway. On the other hand, who wants to see a series of portraits of Hitler, even if they do have socio-political connotations? (paintings by McDermott & McGough from their series ‘Hitler and the Homosexuals’.)

At the end of our tour, we came upon two impressive installations, especially since our first glimpse of them was from above.

A circle of masks made of woven vines by Khvay Samnang. 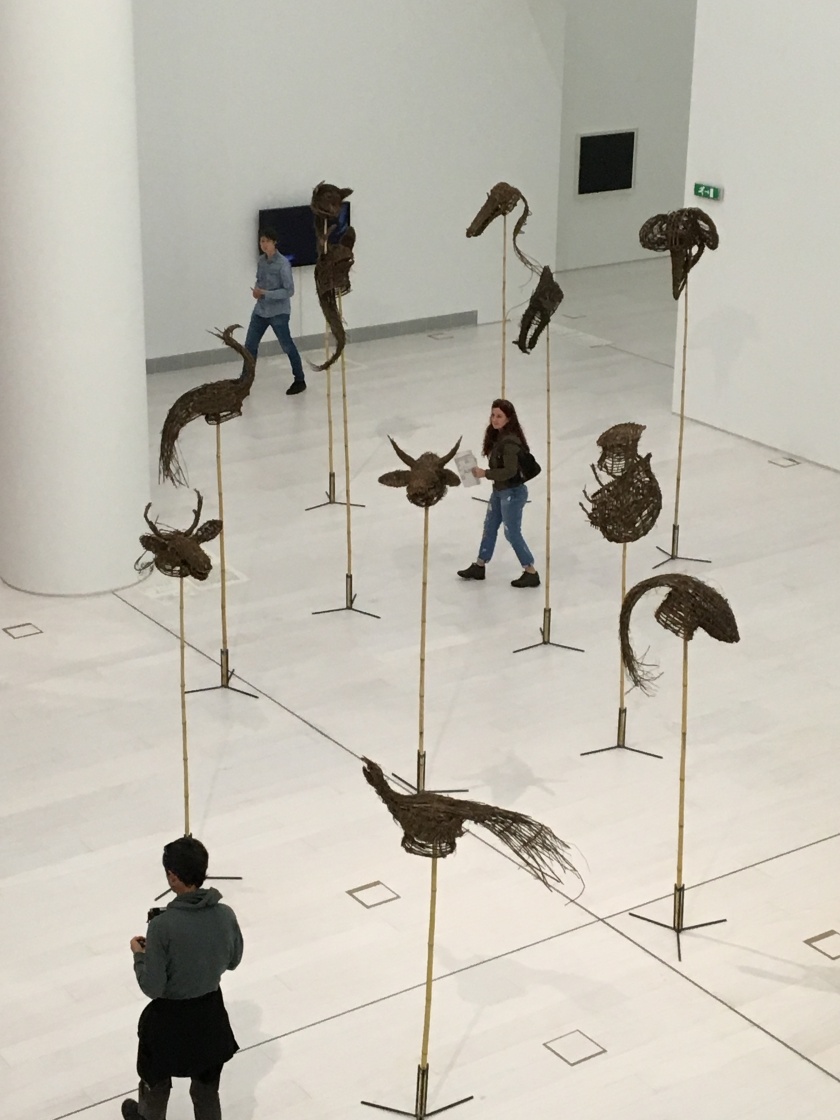 And I loved Quipu Womb (Story Of The Red Thread) by Cecilia Vicuña. The ancient art of Quipu is a pre-Colombian form of writing involving intricate knotting patterns. Here, untreated wool was sourced from a local Greek provider and dyed red.

Art is rampant all over town, and one of the positive effects of Documenta  is that it has attracted a lot of visitors from abroad. Documenta has been called a ‘cultural peace offering‘ from Germany to Greece by some, a ‘Trojan horse’ by others. It so vast and diverse that it is intimidating: one has to make up one’s own mind in the end. The dialogue continues.

Documenta is on for 100 days, so I will certainly be seeing more of it. For anyone interested in more detail, however, or for those of you living in Greece, I recommend browsing Art Scene Athens, a blog I have often referred to before. There are several detailed posts on the subject, a lot more erudite and objective than my own biased view!

27 thoughts on “Documenta comes to Athens”