I like to do as much sketching from life as possible because, although often imperfect, it helps capture movement and spontaneity. And I do find nature is a great inspiration.

Plants, trees and flowers are easiest, because they don’t tend to move around much, and humans can be persuaded to pose. Animals are a lot trickier. Dogs are best when they’re asleep, but mine sadly is so small and dark that from above she just looks like a black blob; I would need to get down on floor level, but, when I do, she wakes up and starts jumping around like a flea.

A nice field of cows having a siesta in the sun is not too bad, but horses are a nightmare. No sooner are you set up that they decide to come over and see what you’re doing, eat the paper, chew your clothes, etc. Even if you’re on the other side of the fence, you get a load of snorting nostrils, bug eyes and, if there’s a few of them, shoving. And then they gallop away… 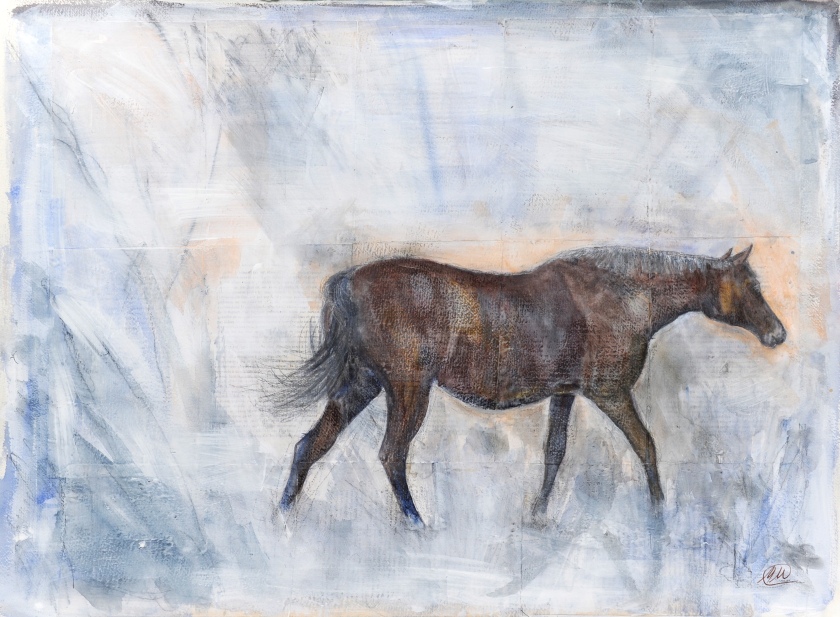 The famous 18th century painter George Stubbs used to hang cadavers of horses in his barn to be able to study their anatomy. The smell must have been unbearable—and the flies! Ugh…
Nowadays we have manuals and photographs to study from, and videos that can be put in slow motion to break down movement. 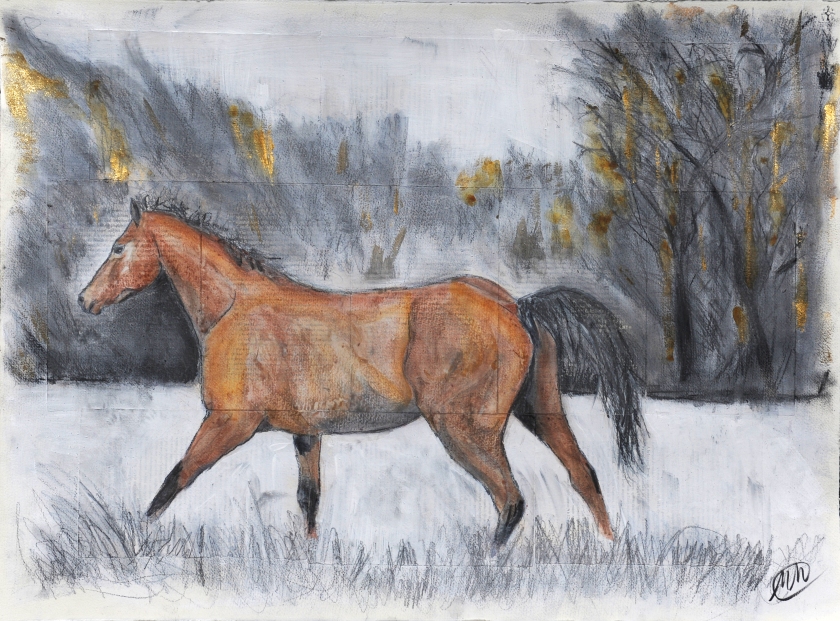 Horses are fascinating, expressive creatures, so I’ve been making a whole series of paintings, incorporating my previous work with layers and collage. Under some of the paintings I used pages from an old book, primed with gesso—amusingly, the book is an old French manual of equitation (you can see it most clearly in the first painting.) I also used tissue paper, silver foil and eco-print paper for the collage, and charcoal, pencil, graphite powder, watercolor, and oil pastel for the images.

I did not aim towards photorealism, but made the horse the center of a dreamlike, abstract landscape. The background could be water, or snow, or an indistinct field, or clouds of dust.

Horses are prey—that makes them nervous and fleet, because of the flight response. However, when not threatened they are serene, and enjoy being in their natural environment. 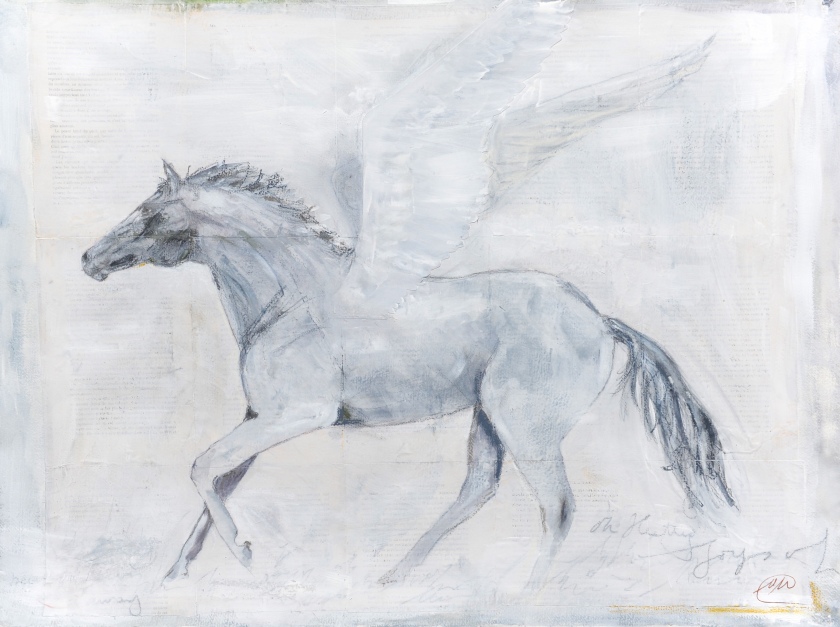 I’m also drawn to horses of myth, who play a big part in many legends, and are especially prominent in Greek mythology. Immortal horses drew the chariots of Zeus, the sun god Helios, and Achilles in the Trojan war. They were gold-bridled, sometimes fish-tailed when they belonged to Poseidon, and often winged, like Pegasus.
So I had to have winged horses in my series. 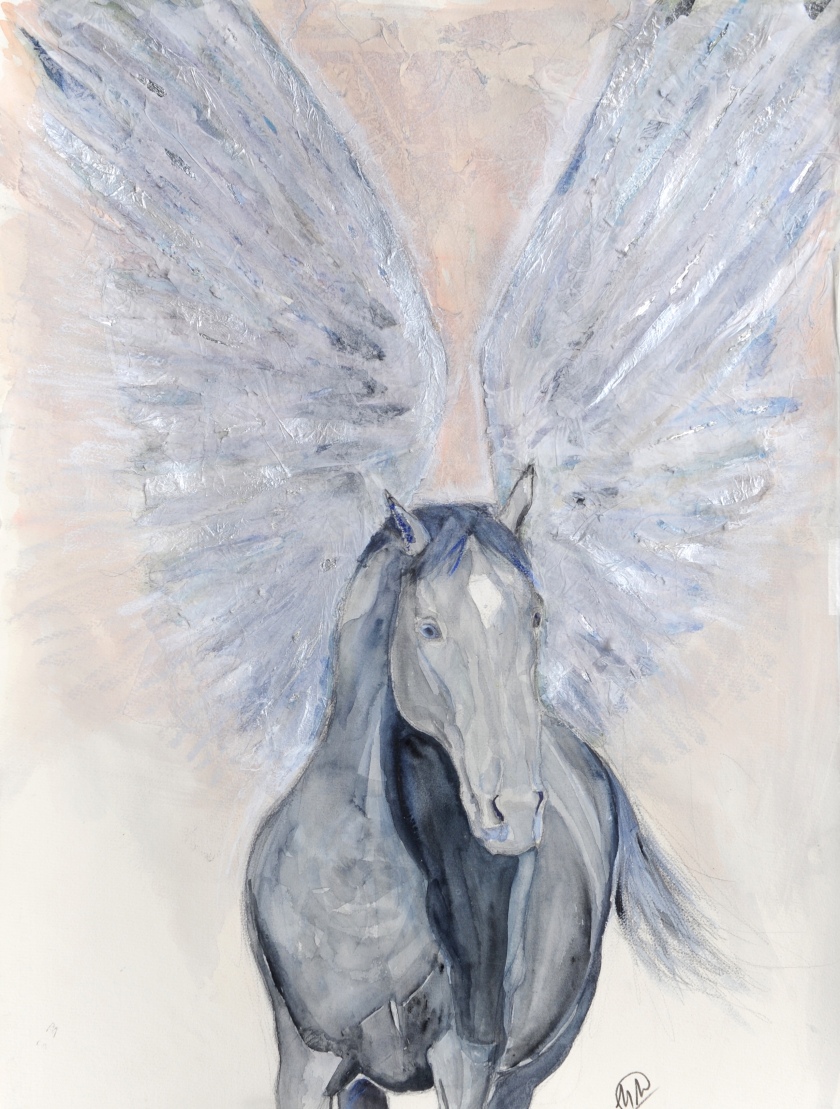 When I bestride him, I soar, I am a hawk: he trots the air; the earth sings when he touches it; the basest horn of his hoof is more musical than the pipe of Hermes. ~William Shakespeare, Henry V

Man and horse have been linked since time immemorial. Horses appear in cave paintings, such as this one from Lascaux, in France. 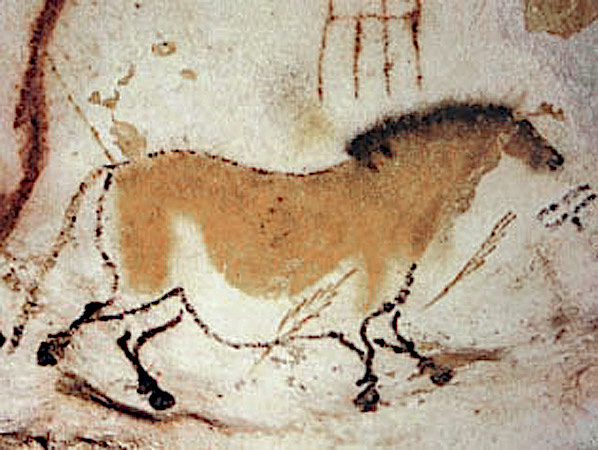 We find them on Ancient Greek pottery, 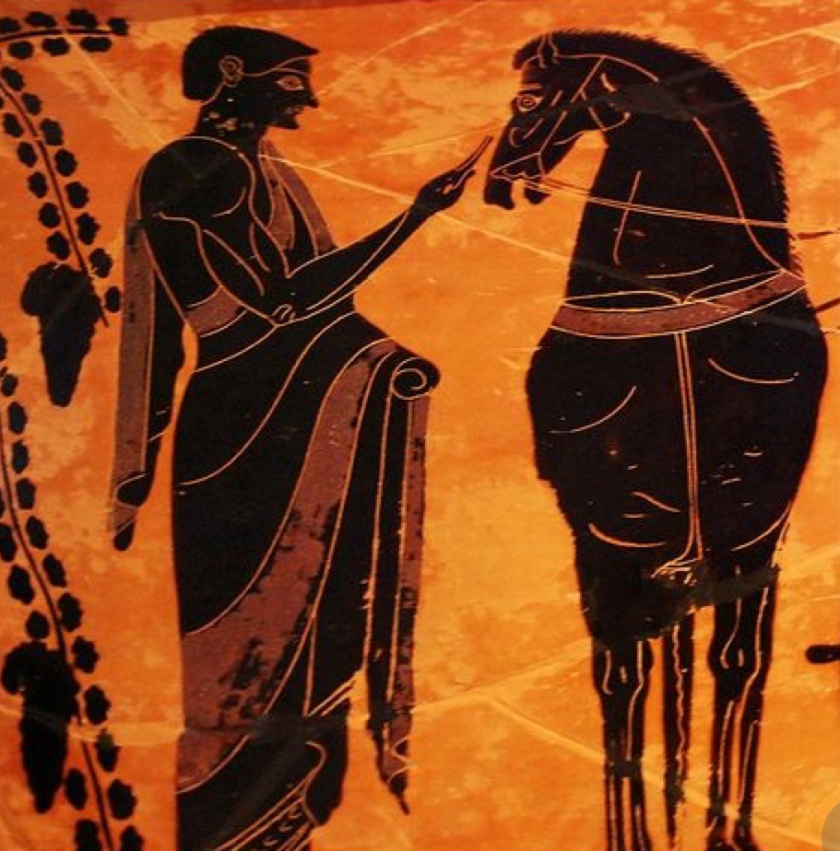 and in the wonderful Parthenon marbles. 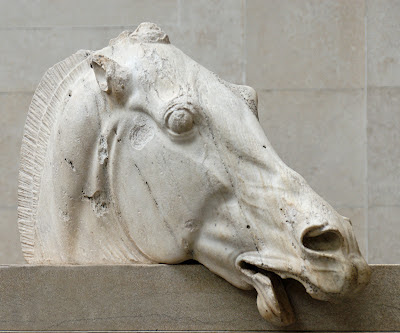 The horse has been depicted by a multitude of great artists, and  lauded in poetry and prose:

How They Brought the Good News from Ghent to Aix

I sprang to the stirrup, and Joris, and he;
I gallop’d, Dirck gallop’d, we gallop’d all three;
‘Good speed!’ cried the watch, as the gate-bolts undrew;
‘Speed!’ echoed the wall to us galloping through;
Behind shut the postern, the lights sank to rest,
And into the midnight we gallop’d abreast.

Let us nudge the steam radiator with our wool slippers and write poems of Launcelot, the hero, and Roland, the hero, and all the olden golden men who rode horses in the rain.

Horses and Men in Rain by Carl Sandburg

The Mourners
When all the light and life are sped
Of flowing tails and manes,
And flashing stars, and forelocks spread,
And foam-flecks on the reins;

There is nothing so good for the inside of a man as the outside of a horse. ~John Lubbock, “Recreation,” The Use of Life, 1894

Horse sense is the thing a horse has which keeps it from betting on people. ~W.C. Fields

The wind of heaven is that which blows between a horse’s ears. ~Arabian Proverb

Horses have been part and parcel of our civilization.

This short miscellany which does not pretend to cover even a tiny part of the subject, has been an inspiration for a series of mixed media paintings of horses that I’ve been making.