I always like to have a couple of books on the go – something light to read at bedtime, like a crime novel or a book of short stories, and something more challenging for when I’m not falling asleep after one page. Not that there are rules – it all depends what mood I’m in, how busy I am, etc. Sometimes I almost long to get the flue so I have an excuse to stay in bed all day with a book!

One hefty tome I’m picking my way through is the Herodotus Histories. Written around 450 B.C., in the Ionic dialect, it is a record of the ancient traditions, politics, geography and clash of cultures of the then ‘known world’ – Western Asia, Northern Africa and Greece. Its main theme is the rise of the Persian Empire and the causes of the Greco-Persian wars.
Herodotus portrays the conflict as one between the forces of slavery (the Persians, whom he calls ‘barbarians’) on the one hand, and freedom (the Athenians and the confederacy of Greek city-states which united against the invaders) on the other. His aim is to preserve the memory of this clash of two worlds and also of the ‘works of man’ that he so admires. In doing so, he is sometimes a strict historian, sometimes almost a poet.
Embed from Getty Images

Herodotus, a contemporary of Socrates, was born in Halicarnassus, Caria (modern-day Bodrum, Turkey) and lived in the fifth century BC. Widely referred to, notably by Cicero, as “The Father of History“, he was the first to treat historical subjects as a method of investigation, by collecting his materials systematically and critically.
He travelled widely in the known world, looked at everything with insatiable curiosity, asked questions and wrote down the answers. We must remember this was in a time when an embassy would set out from Athens and, even traveling with all the facilities available to official missions, arrive in Sousa in Persia after three months! Herodotus went as far as Assyria and Babylon, Persia and Egypt. He sailed up the Nile. He went north to Kolchis, describing the snows of the Ukraine. He travelled the whole of Greece, and visited Sicily. His work can be described as a sort of historical and geographical encyclopaedia.

This treasure-trove of anecdotes sometimes seems to waver between history and myth; and yet, Herodotus of Halicarnassus both coined the term, ‘historia,’ and invented the genre. History can therefore be anything that he, the very first historian, pleases. And ‘historia’ – Ιστορία –  to Herodotus, meant ‘enquiry’ or ‘investigation.’ Also, many of the stories which were considered fantastic have, with later discoveries, been proven to be true. 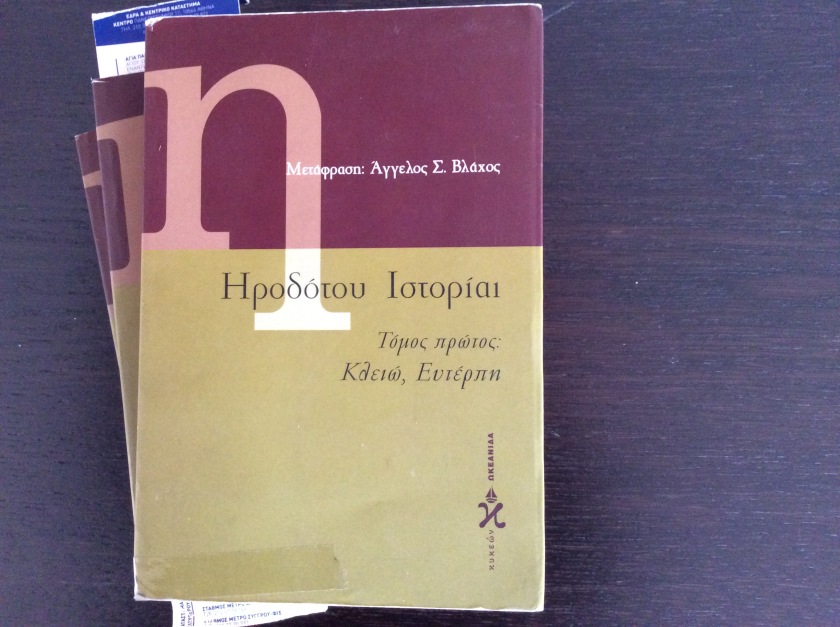 Histories was, in the Alexandrine period, divided into the nine books that appear in modern editions, named after the nine Muses. I’m currently in the middle of book III, Thalia. I’m reading it in Modern Greek – the excellent Angelos Vlahos translation.
For English speakers, there are many translations, such as the Robin Waterfield one below.

Histories is a highly entertaining read, with amazing stories of emperors and kings, e.g., the tale of Gyges, a mere bodyguard who, after being forced by King Candaules to peek at his beautiful wife as she is undressing, murders the king, marries his wife and becomes tyrant of Lydia; or wealthy Croesus, King of Lydia, who keeps pestering the Delphic oracle, finally learning that if he attacks Persia, a Great Empire will fall – a riddle that Croesus does not understand until he has been ensconced on his own funeral pyre by Cyrus, King of Persia.
Herodotus also tells of the poet Arion, saved from drowning by a dolphin who carried him safely ashore; he relates that the Egyptians hunted crocodiles, respected their elders, and slept in huts that were on stilts to escape being bitten by mosquitoes which hovered near the ground.

Reading Herodotus is like taking a trip back in time, and discovering an ancient world in the company of an intelligent, observant and amusing guide. Highly recommended.

13 thoughts on “A walk with the Ancients: Herodotus”