Today is the second Sunday of the new year. Time for stocktaking – what are the prospects before us?

I took a look at the main Sunday papers. Although of different political persuasions, the themes they deal with are the same.

The problematic state pension scheme, the constantly increasing taxes, and the difficult measures that have to be taken in order to satisfy our lenders. Depressing, to say the least!

The second round of voting to choose a leader for the New Democracy party (the main opposition party) takes place today. It is between Mr. Meimarakis, a member of the old guard, and Mr. Mitsotakis, much younger and more modern, but a member of an old political – and often controversial – family. Is there, in actual fact and despite what they’re proclaiming, much to choose between the two? Voters who turned out in decent numbers for the first round are, so far today, exhibiting election exhaustion. 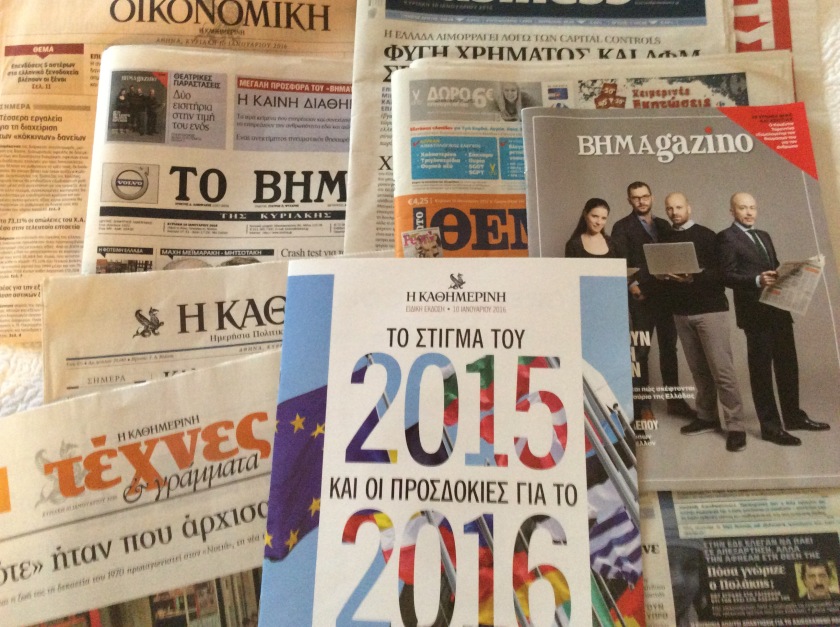 European countries are complaining about the number of refugees allowed into Europe but, let’s not forget, most of those are still in Greece (to say nothing of the vast numbers stuck in Turkey). It is clear the situation is totally out of control. Today the articles were about increasing instances of fights amongst the refugees themselves, especially between groups with different religions; abuse of women and children; cases of women selling themselves in order to pay the traffickers; extortion; black markeering in cellphones, fake documents and other goods.

In a horrifying statistic given out by the organization “Missing Children Europe“, 50% of unaccompanied children arriving at one of the refugee centers disappear within 48 hours never to be found again.

Very few of the refugees are actually in the centers – the rest are wandering around, penniless, hungry, hounded by the police.

Meanwhile, the trafficking business is thriving, starting from Syria itself, where allegedly there are special ‘schools’ coaching people how to reach Europe.

In Bulgaria, the police has issued a warning to hunters to be careful what they shoot at in the woods, in case the prey is not a wild boar but some refugee hiding from the authorities.

However, in a different article, there are glowing reports from various workers from the NGOs working on the island of Lesbos. This is close to the Turkish coast and has received huge numbers of refugees. The NGOs are doing a great job, but they’re also full of praise for the islanders, who have been welcoming the refugees to the best of their ability. People collect food, prepare formula for babies, grandmothers are even knitting little sweaters. Many volunteers from all over the world have also arrived, some giving up their vacation to help, others declaring their willingness to stay ‘until the war ends in Syria.’

Another, more curious, article deals with the refugees who have arrived with their pets. As a general rule, this has been well received by the Greeks, who think it a very human touch. In some other countries, however, (apparently Slovenia is one,) the refugees’ pets have become an object of political pressure, as well as a business: border controls confiscate cats and dogs, even those with passports, microchips and the correct vaccinations, and put them in quarantine,  demanding for their keep and release exorbitant amounts (up to €2000). Otherwise the animals are euthanized…

The Sunday supplements have the usual restaurant reviews: a new Italian in Kolonaki, an Asian street food bar, a tacos place. And two great salad recipes, to detox after the festive overeating. My favorite? A rocket salad with roasted beetroot, walnuts and orange.

The political situation remains unstable, and thing are not looking good yet. But the start of a new year always feels like a new start, and there is a tiny whiff of optimism in the air.

In other, unrelated, news , as Anita Kunz put it: ‘As if everything else this past year weren’t enough , now Kim Jong-un shows up again.’
She’s doing a cover of him as a baby playing with toy missiles, for the New Yorker.

Please feel free to join in with other pleasant surprises awaiting us in 2016!

11 thoughts on “The Sunday Papers”