The limerick packs laughs anatomical
Into space that is quite economical.
But the good ones I’ve seen
So seldom are clean
And the clean ones so seldom are comical.

But limericks were not always bawdy. In fact the form was made popular in the 19th century by Edward Lear, a great believer in pure silliness. In 1846 he published A Book of Nonsense, which went through three editions and made limericks so popular that many people started using them to amuse, scandalise or satirise.

We used to have the Lear books and other collections of limericks, and as a child I read them so many times that I still remember my favorites. Here are some of them, interspersed with illustrations from the Lear books:

There was an old man from Blackeath
Who sat on his set of false teeth
Said he with a start,
Oh lord, bless my heart
I’ve bitten myself underneath!! 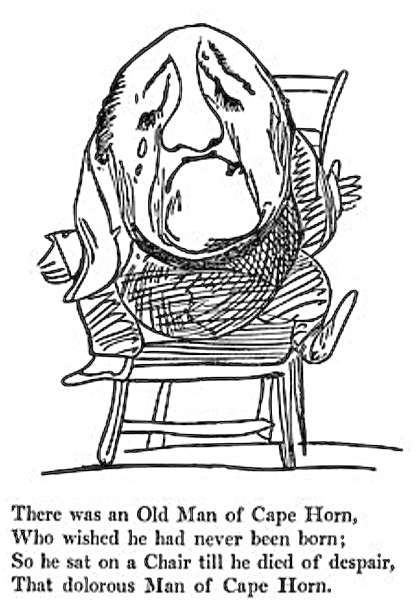 I sat next to the duchess at tea
Distressed as a person could be
Her rumblings abdominal
We’re simply phenomenal
And everyone thought it was me! 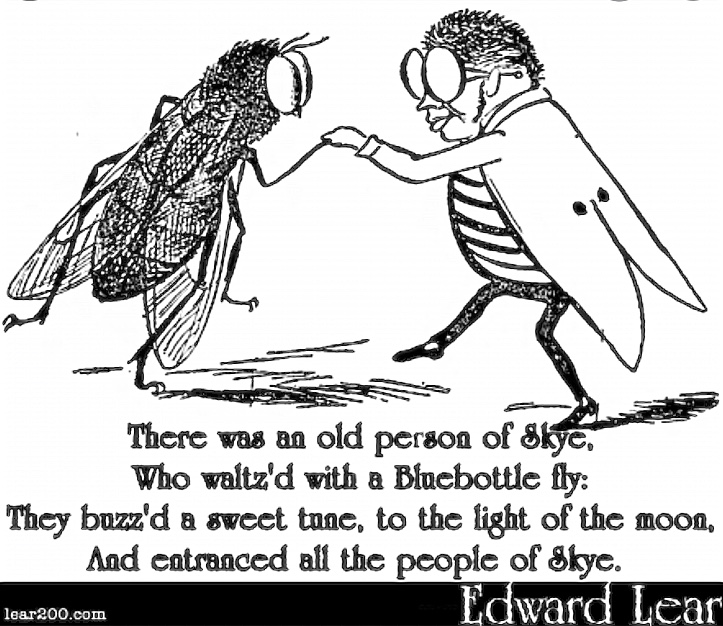 A feisty young girl from St. Paul
Wore a newspaper dress to a ball
The dress caught on fire
And burnt her entire
Front page, sporting section and all. 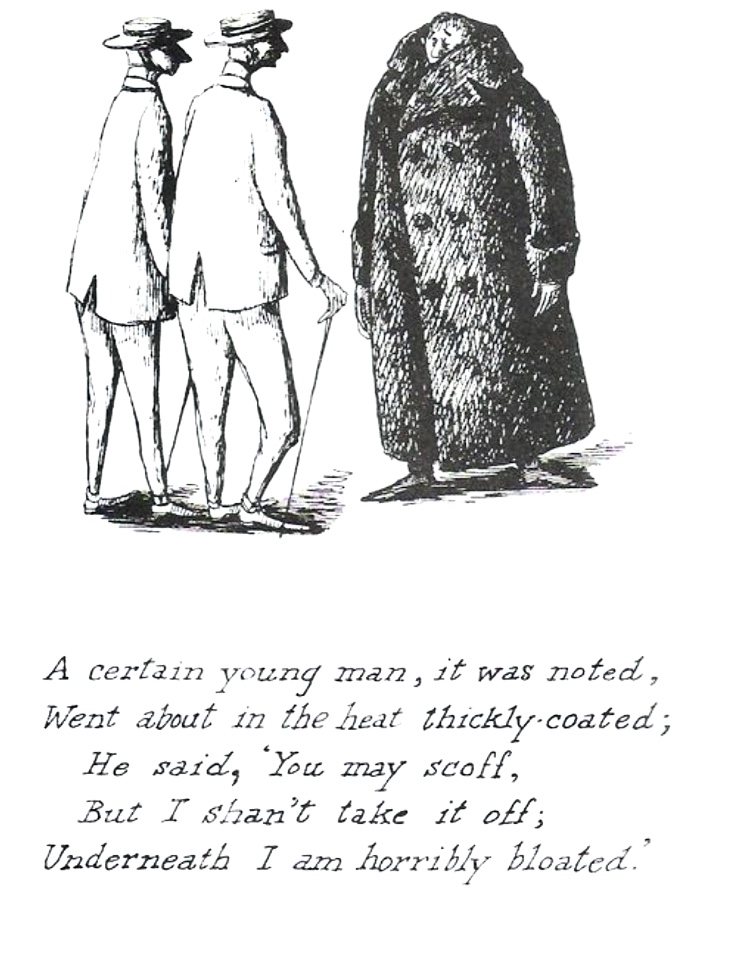 He illustrated the verse with his detailed ink drawings

This is read as follows:

A dozen, a gross, and a score
Plus three times the square root of four
Divided by seven
Plus five times eleven
Is nine squared and not a bit more

Quite clever, don’t you think?

Not to be outdone, I’ve produced a few limericks of my own over the years, some of which you might have seen, since I made illustrations to go with them for Inktober 2019. (Posted Here )


And so, dear readers, hoping I have sufficiently inspired you by now, I would like to urge you to send me your own efforts. We’re not talking about a competition here, just a fun thing to do. No prizes to be had, but if I get enough, I will do a post on them and make a few illustrations, too!
So come on, people, put your humorous thinking caps on!

There are so many hours one can spend on a screen, and now that we’re facing another few months of restricted outings, listening to podcasts is a very pleasant way of getting immersed in different worlds. I’m an obsessive bookworm, but it’s nice to have something to listen to while cutting up veggies or ironing. A human voice: it’s almost like company, when you’re alone; and it’s different to music.

I’ve listened to a lot of audiobooks, and that’s lovely as well, especially when read by someone with a voice that suits the subject; but podcasts are short, and you don’t constantly have to remember who the characters are.

There are millions out there, of course, but here’s a list of some I recommend:

For crime aficionados, whether writers or readers, Listening to the Dead podcast features crime writer Lynda La Plante and CSI Cass Sutherland. They discuss, in fascinating detail, how the police investigate various forensic aspects of crime-solving such as insect infestation, arson, DNA and fiber analysis. Amusing as well as informative.

Caliphate follows journalist Rukmini Callimachi, who covers terrorism for The New York Times, on her project to find out about ISIS. Listening to the podcast is quite harrowing, and there’s an added twist to the tale, because Canadian authorities have since arrested a man featured in the podcast and accused him of falsely claiming to have been an ISIS executioner.

For art lovers, the Great Women Artists podcast is presented by art historian and curator Katy Hessel. She interviews contemporary women artists such as Cecily Brown and Toyin Ojih Odutola, or curators and art historians who talk about famous artist like Alice Neel and Georgia O’Keefe. Some of the artists you might never have heard of, but it’s interesting finding out about them. Has excellent reviews.

On The Worldwide Tribe podcast, the incredible Jaz O’Hara (I’ve written about her before here) brings us stories from the refugee crisis. Jaz, whose mother is fostering no less than four refugee children from four different countries, wants to give people a voice, so that their stories come to light. Really moving and a great eye opener.

For fiction addicts, there’s nothing better than a good short story, and the New Yorker offers two podcasts: The Writer’s Voice, where writers read their own stories, and Fiction, in which writers pick a story from the magazine archives to read and discuss with the fiction editor, Deborah Treisman. There’s something for every taste, and the beauty of it is, if you find you hate one of the stories, just go on to the next one!

In Here’s the Thing, actor Alec Baldwin takes his audience into the lives of performers, policy makers and artists, by going into their offices, appartments and dressing rooms. He interviews a wide range of people. I loved the episode with Patti Smith.

Finally, for a bit of fun, Fake Heiress is the story of Anna Delvey – the apparent millionaire heiress who grifted her way through New York’s upper echelons. Journalist Vicky Baker and playwright Chloe Moss collaborate on a podcast that mixes reporting about the millennial fraudster with a dramatisation of her swindle. In the reviews, people complained that the actors’ accents were terrible, but whatever. I don’t think we’re meant to take this seriously, although it is a true story; Netflix and HBO are supposedly preparing films about it. Anna Delvey, at the cost of a few years in jail, will probably end up richer than she ever imagined!