The British sculptor Anthony Gormley seems to be everywhere these days. Sadly, I never managed to get to Delos to see his fantastic installation (for those who missed my post on this, you can find it here), because Delos is not easy to access. However, I took the opportunity to see his lovely exhibition at the Royal Academy  in London. 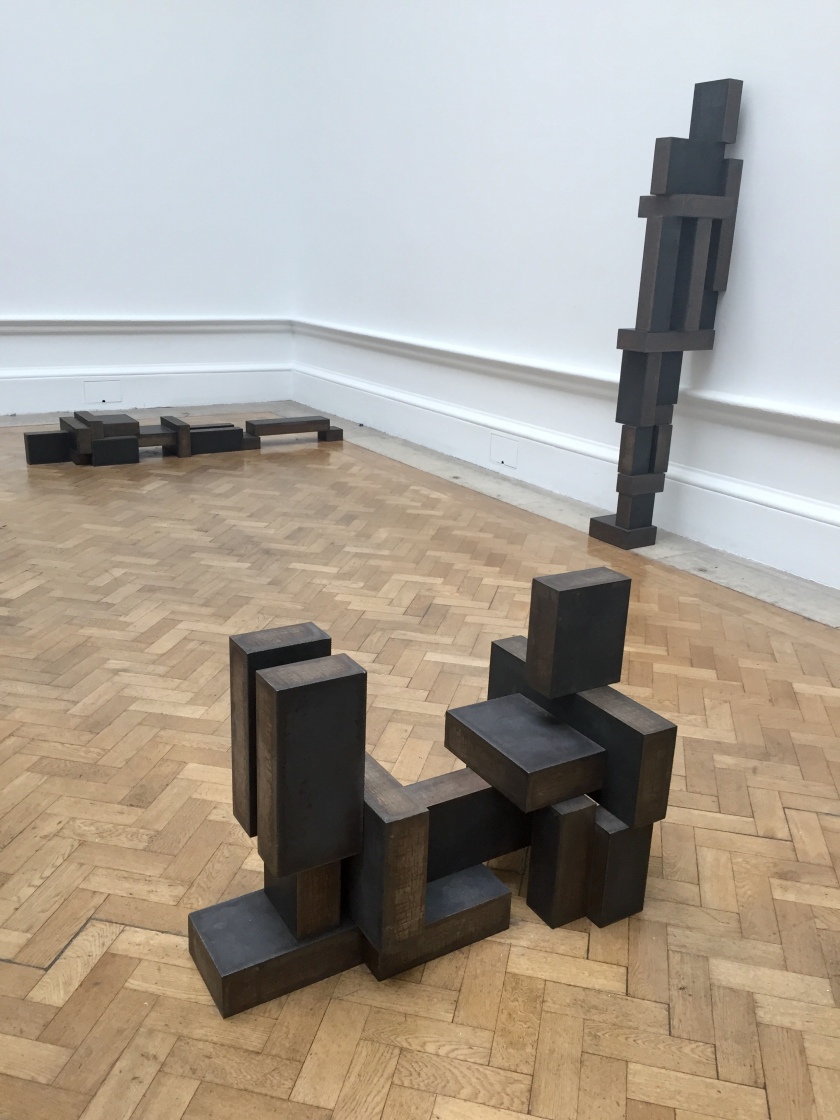 There were many of his ubiquitous depictions of the human body in various forms: 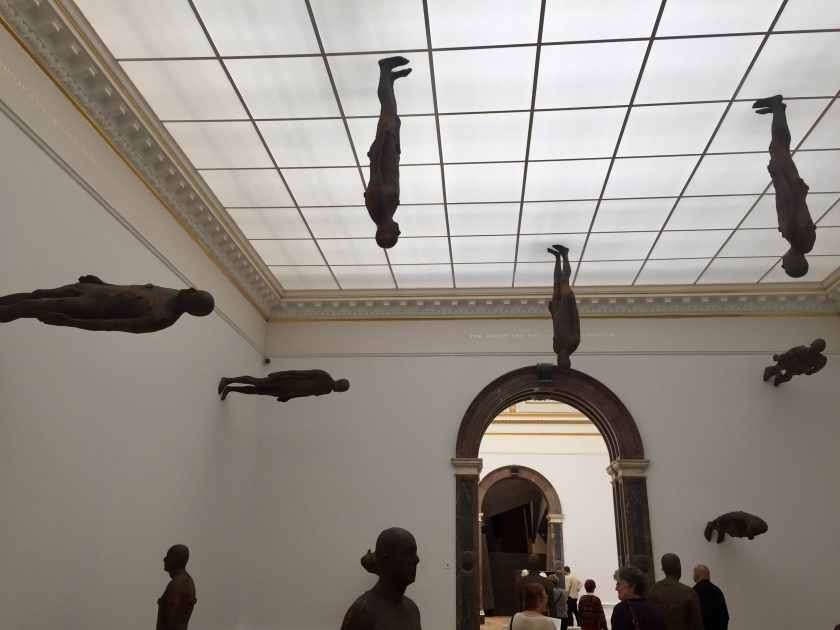 Walking on the ceiling. 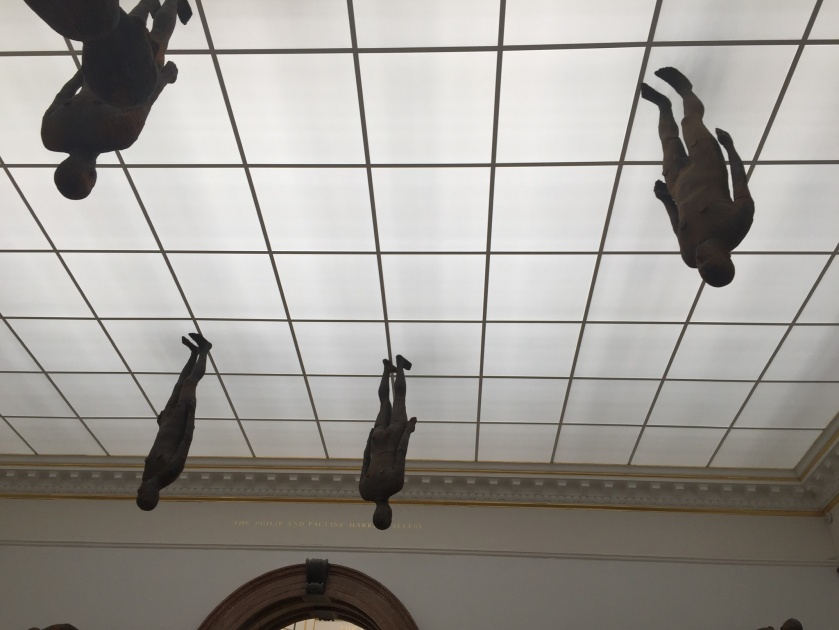 But also some large and impressive installations:

Visitors were invited to walk through this one.

The one below looked like an alien vessel – an impressive 6 tons of steel rods suspended from the ceiling, dwarfing the people  beneath. 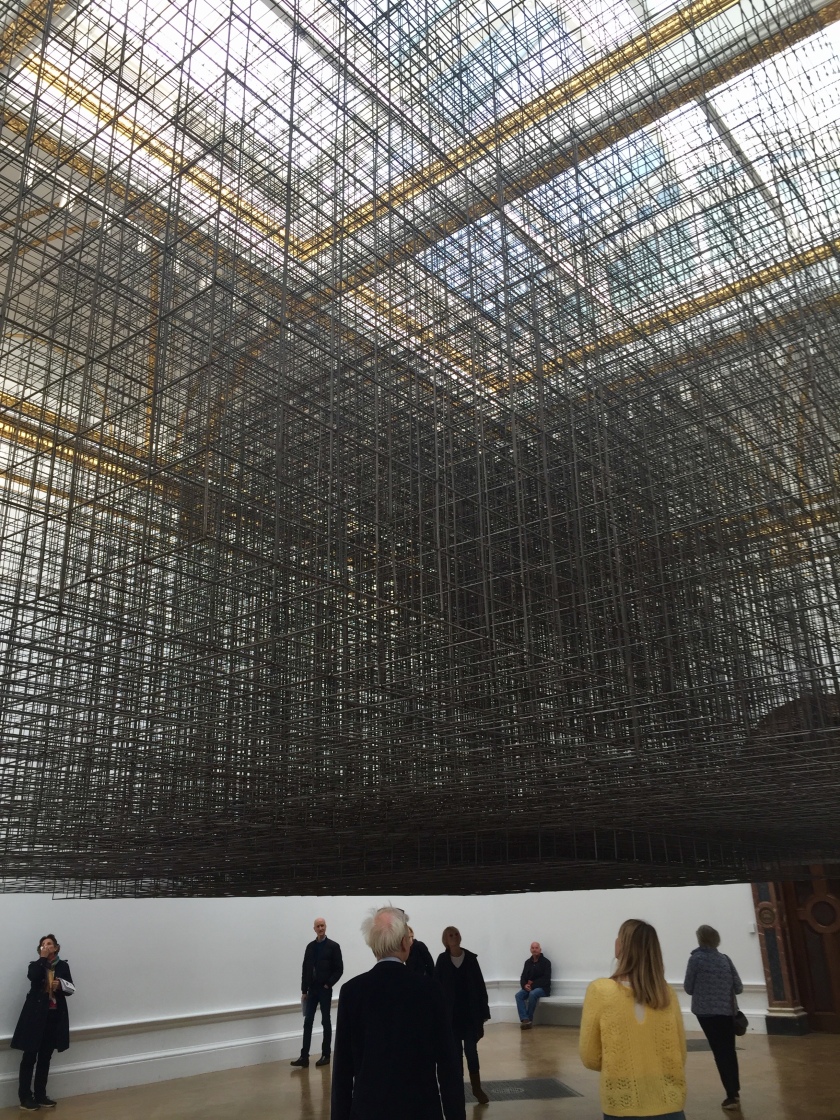 You could also walk through this next one, via the rectangular opening leading into a narrow steel tunnel, in almost total darkness – if you weren’t claustrophobic, that is. 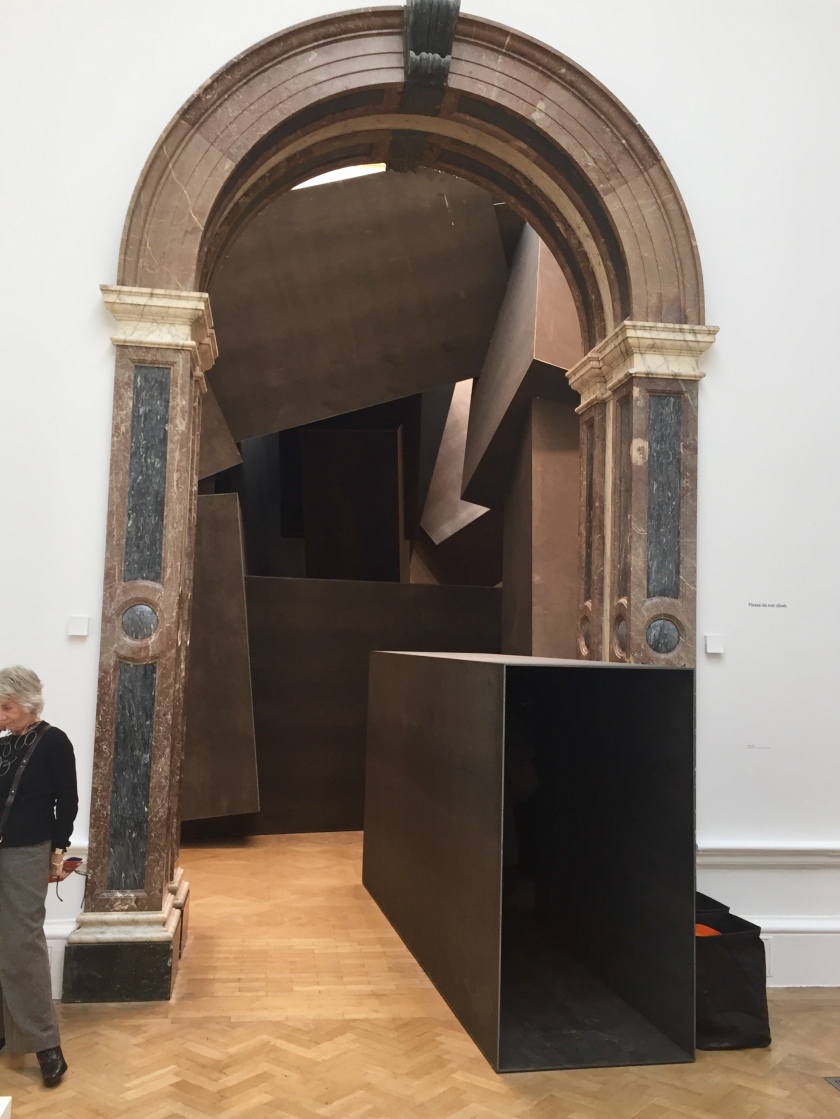 But I mostly loved its architectural shapes, framed by the arched doorway. 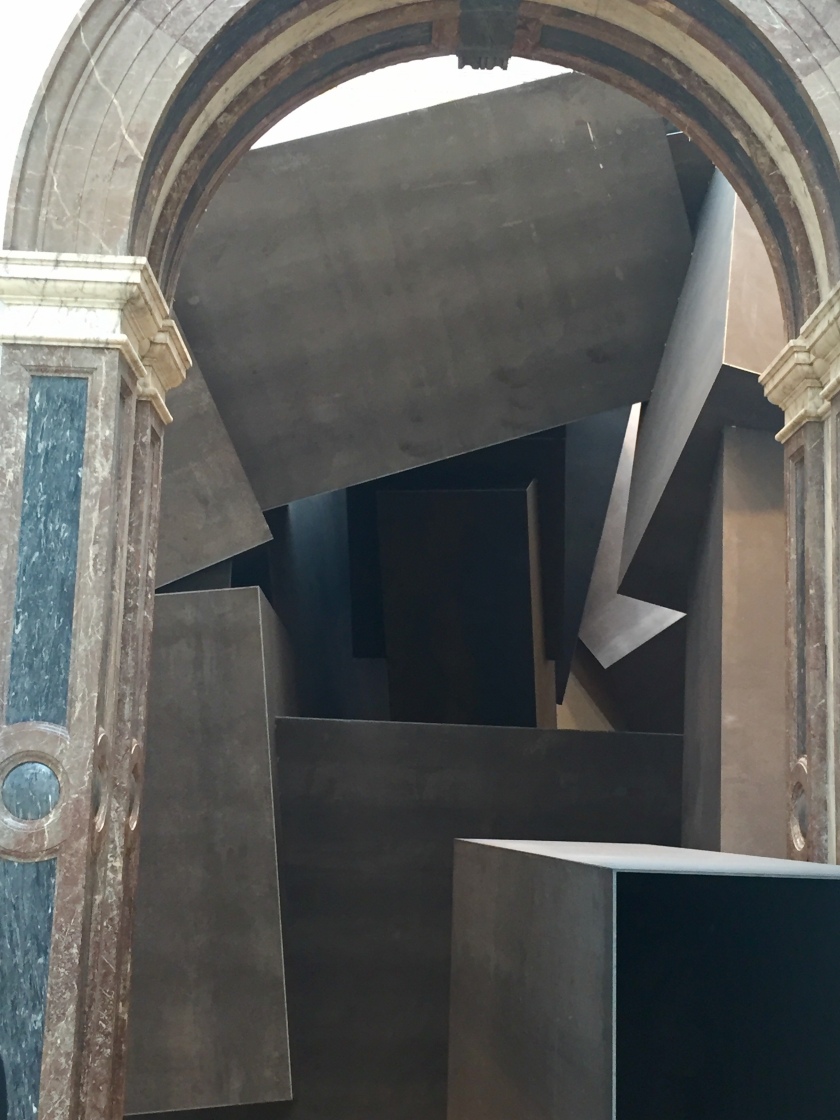 Another installation featured a room flooded with Atlantic seawater on a bed of clay from Buckinghamshire. In general, the installations were  site-specific, fitting beautifully into the shape of each room. 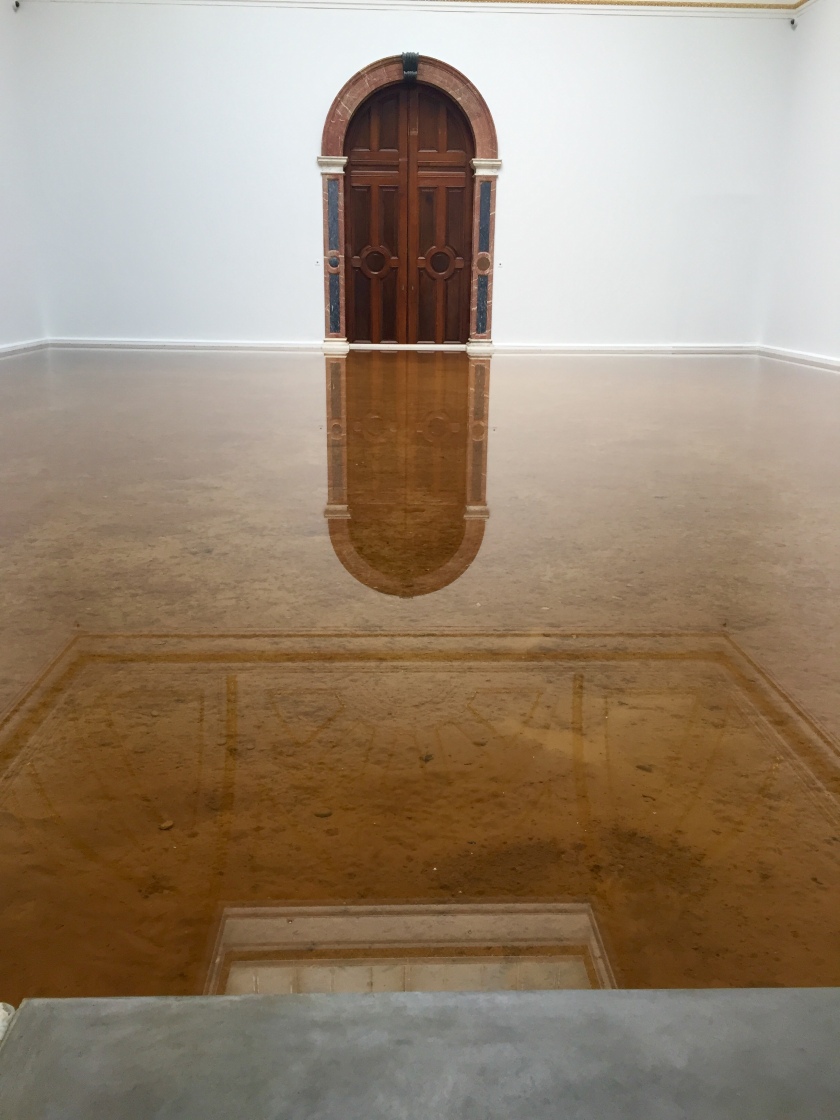 Wall art included the work below, made with clay on a blanket, which had a fleeting, haunting aura.

The one below was not one of my favorites, but intriguing nonetheless, since it was made out of slices of bread dipped in wax:

Finally, for someone like me who loves works on paper, there was an abundance of treasures on offer, including a multitude of small spiral notebooks where Gormley recorded his ideas (these proved impossible to photograph, since they were presented in glass cases).

These drawings were made with charcoal and casein.

And there was a whole, luminous series made with earth mixed with linseed oil.

I came away most inspired.

Highly recommended, if you’re anywhere nearby.

In the centre of the Cyclades archipelago, near the famous island of Mykonos, a small, uninhabited island rises out of the turquoise sea. This is Delos, barely 5km long by 1.5km wide, treeless and bare, and so small that in the heat of summer it almost vanishes in the haze. Amazingly, it is one of the most important mythological, historical, and archaeological sites in Greece.

It was on this island that, according to myth, Apollo, the god of light, and his twin sister Artemis, the moon goddess, were born. And it was here that, in the 9th century BC, one of the greatest sanctuaries evolved. Later still, the Cycladic island became a commercial centre, teeming with merchants and slaves.

Because the island is frequented only by archaeologists and guards, the magnificent ruins have not had to bear the brunt of millions of visitors’ feet. This summer, this idyllic site has become the setting for an ambitious and exciting project, connecting the ancient with the contemporary. Besides the Greek authorities, the main players in this experiment are NEON, a nonprofit organization that works to bring contemporary culture closer to the public, and the British sculptor Sir Anthony Gormley. 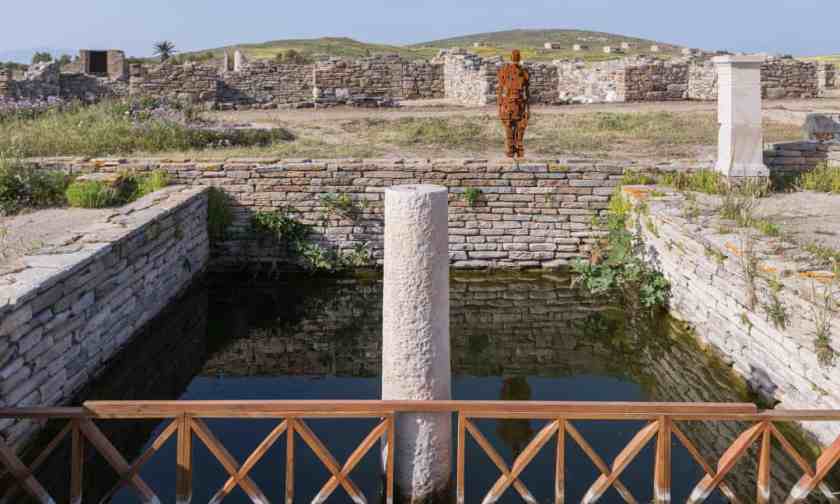 Anthony Gormley, born in 1950, has won the Turner prize amongst many other awards, and is best know for his statue Angel of the North.

For Delos, the artist created 29 iron “bodyforms”, several cast from his own body, that are the first artworks to be installed on Delos since the outpost was inhabited more than 5,000 years ago.

One of these sculptures  greets visitors before they even alight from the ferries that shuttle daily from Mykonos—a lone, eerie figure, standing on a rock at the water’s edge, gazing at the horizon. 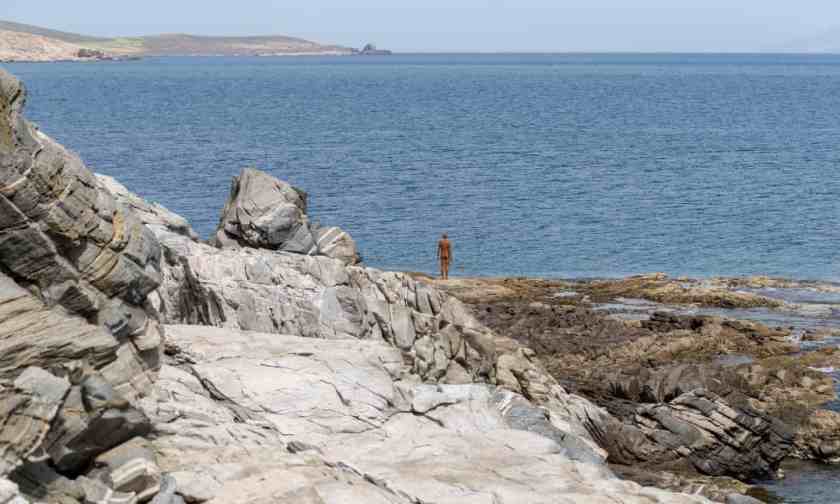 I hope I can manage to visit the installation sometime this summer but, since I cannot yet report on it personally, I include a small extract from the NEON catalogue:

‘Two more works from the same series – also looking towards the distant horizon – stand on Plakes Peak and on Mount Kynthos, and another similar work stands in the waters of the harbour. Further sculptures are integrated with archaeological sites across the island, from the Stadium to the Τheatre district and from the merchant stores to the Museum site.
Visitors to Delos are invited to connect with time, space and nature, which inevitably link to our shared future.
SIGHT is organized and commissioned by NEON and presented in collaboration with the Ephorate of Antiquities of Cyclades.’

Definitely worth a visit, if anyone is near the area.