I am aware I have been absent for a while, the summer has been unusually busy and I lacked inspiration. However, I did manage to take in a few exhibitions, and I will now regale you with some art—beats news of wars, wildfires, hurricanes and funerals, which I’m sure everyone has had enough of.

I’m always on the lookout for new exhibitions curated by NEON, a nonprofit organization that works to bring contemporary culture closer to the public. In the past they have put on many interesting shows, in locations that one rarely gets to visit. I have written about them before. (here, and here.)

The exhibitions are usually excellent, so I went to their latest one, in an old tobacco factory in downtown Athens.

The Greek Public Tobacco Factory, in the area of Kolonos, was the second public tobacco factory in Athens. It was built by the Greek State at the time when the cigarette manufacturing industry was booming. The idea was to house the tobacco processing and packaging companies as well as the tobacco traders’ warehouses with the main purpose of fully controlling tobacco taxation. In its heyday it employed around 3000 workers, and included a customs office, a restaurant for the employees, as well as a house for the guardian of the building.

Today, the old building has been entirely renovated by NEON, who financed the work and gifted it back to the state for public use, as a permanent cultural and social space, while a significant portion is currently occupied by the Hellenic Parliament’s Library and Printing House.

The building itself was interesting, painted on the outside cheerful red and yellow ochre, with a large courtyard paved with flagstones. 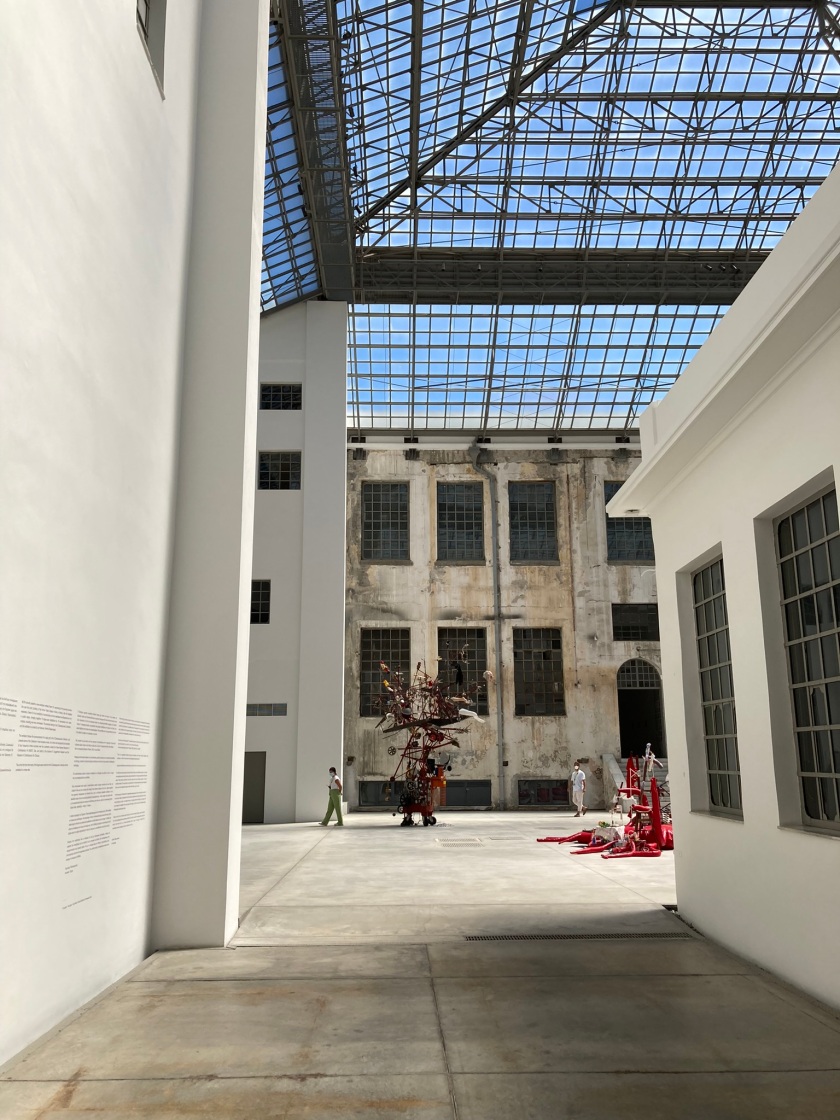 However, the art was, in my opinion, underwhelming. The exhibition was entitled ‘Dream On,’ because ‘Large-scale intallations is where artists go when they want to make their dreams come true.’

Of course art is subjective, and I do like contemporary art, including installations, but the ones in this exhibition mostly left me cold.

A car spilling its guts out in the courtyard.

By  John Bock, it is described as ‘the surreal combination of an American vintage car giving birth to a mutated octopus (or squid).’ 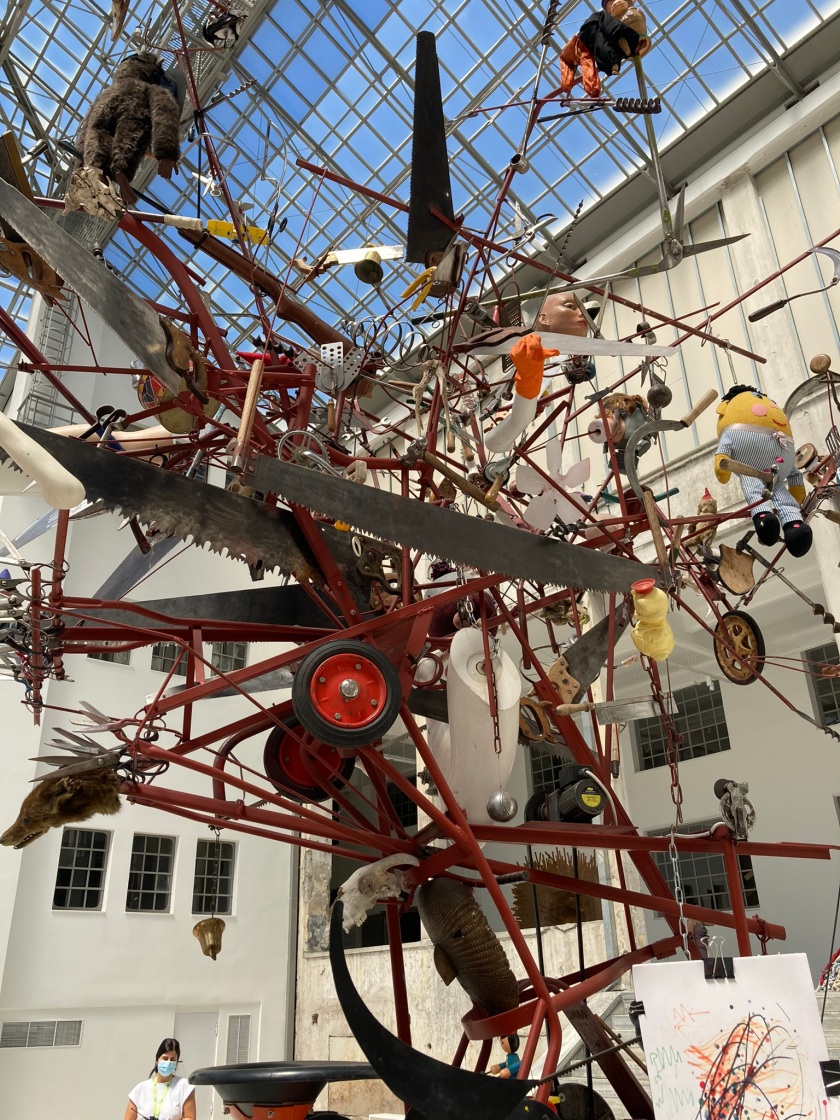 A Credit Card Destroying Machine, by  Michael Landy. This had various complicated meanings which I find too boring to allude to (referring to ‘the death knell of the consumerist society’), but  delighted the six-year-old who accompanied us. I suppose it is pretty cool, in a funfair kind of way. The visitor is required to sacrifice a valid credit card—this went through a mechanism that produced an abstract drawing.

A car, covered in pine needles, by Martha Dimitropoulou, who has ‘reconstructed that paragon of consumer culture, the Mercedes-Benz, into a different life.’

These are called Piss Flowers, by Helen Chadwick 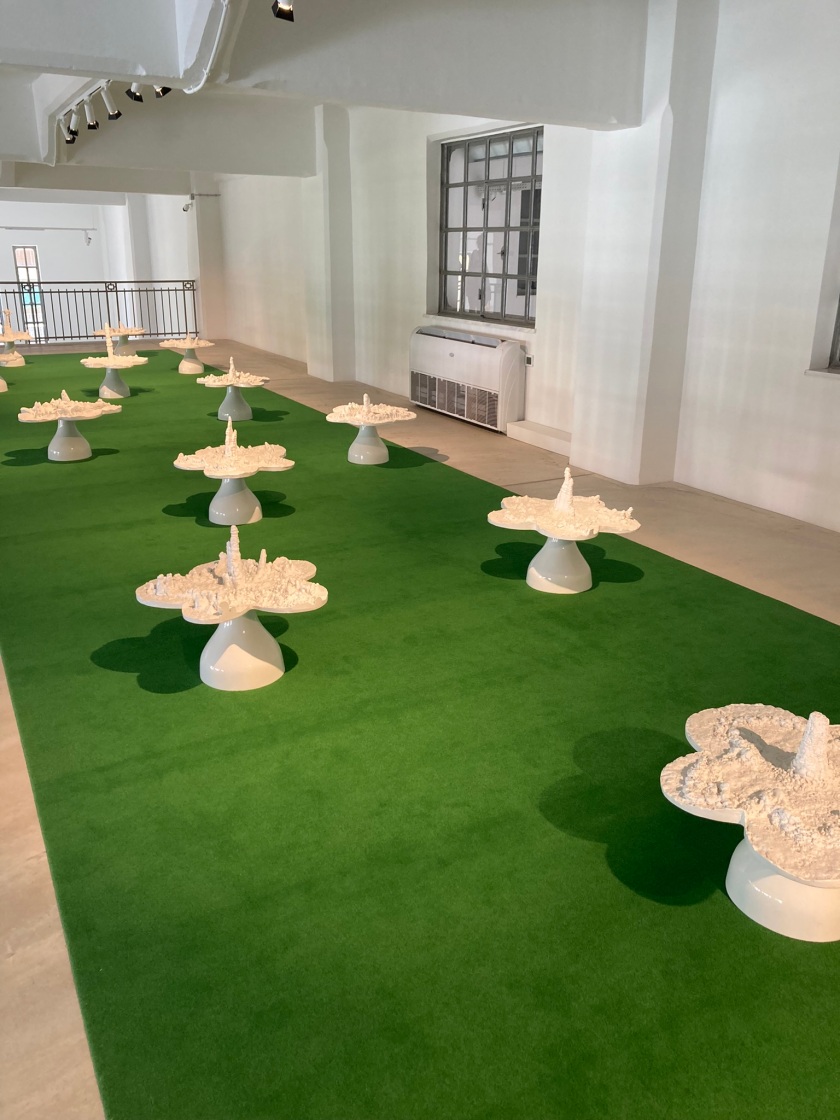 However, there is always something to like, and in my case it was the drawings of a wave, by Alexandros Psychoulis—studies for an installation using plastic cord. 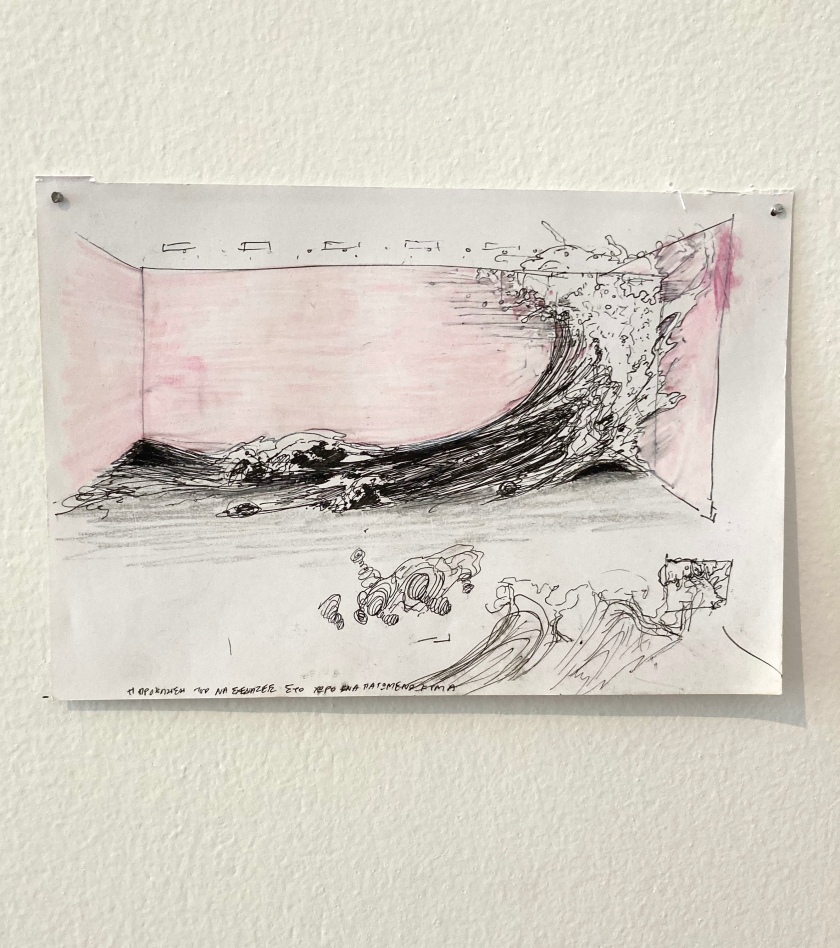 I thought the result was very interesting—of course in my personal opinion. 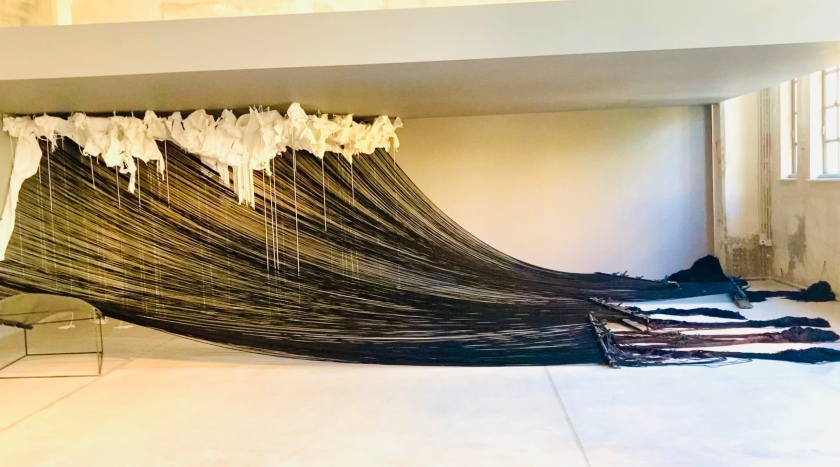