Having left his previous life to follow his dream of living on a yacht, Darren has been boating in the Greek islands and occasionally blogging about it. He also had the chance to explore Athens and the mainland and observe Greek reality for himself. He kindly let me borrow a bit from his Musings from the Med to re-post here, since I always find it interesting to take a look at things through someone else’s eyes. See what he says below:

“It’s now a little over one year since I first discovered Greece. I came initially to view a boat and make a holiday out of the trip. A sailboat was bought and Greece has been home for 2015.
Athens, 2014, where my trip began was hot and bustling. I had opted for a hotel not too far from Omonia square. The guide book said it was an area renowned for Russians, prostitutes and general dodginess – not that I am trying to make a connection here, nor was that the reason I chose that area! It was simply cheap and geographically well suited to my needs of exploration.
I seem to recall the streets being full. The flow of people, made up mainly of tourists, was difficult to pass if caught going in the wrong direction; Monastiraki was crammed with people sipping their freddo coffees and pointing cameras through all cardinal points. The city was alive!
With a hire car I ventured further afield: Peloponnese, Lefkadha, Meteora and Sounion. No matter where I went, I found a natural beauty I had not found anywhere else in Europe. The tourists were still there, the numbers varying with the area/location.
2015: economic crisis, debt uncertainty and politics – something I don’t concern myself with – very much the focus in Greece. It wasn’t like this when I first arrived in early March of this year. I had made friends with some fellow yachties and talk was of pleasant sailing, discovery and fine dining on the abundance of fresh fish and seafood one can easily find here.
Apart from a few teething problems, the sailing began well. The warmer weather became more permanent and the winds and rain became less of a concern. I had been asked to go back to Africa in June to help out on a project I had been involved with in 2014. It was only for 5 weeks so off I went. It was during this period that I became aware of the crisis unfolding in Greece. Had I paid more attention to politics and, well, read newspapers or listened to the news, it may not have crept up on me so suddenly!
The scaremongering of the news people was good; I was fearful for a lot of things. My money and life were tied up in a boat in Greece. I had no idea what could happen but did fear the worst! It was time to head back to Greece and face the uncertainty. I came back armed with euros and a plan to take the boat elsewhere should the situation look impossible. I needn’t have worried half as much. Not all cash machines had money but those that did readily churned out notes for me. My boat was not going to be impounded and sold off to put money in the Greek coffers…
Actually, at first, all seemed as I had left it. I remained in Athens a few days before heading back north to Preveza. During my stay in Athens I began to notice the difference. The bustle was less; there was an uncertain calm; there seemed to be more homeless on the streets – or more than likely they were now visible due to the lack of visitors to the capital – perhaps they had always been there, hidden and ignored by the masses too eager to get snaps of the Acropolis.
Whatever the reason, Athens was not the same as when I had first visited 12 months prior. It seems to be the same story all over. I have pulled into anchorages and town quays in the Ionian expecting to fight for a spot only to be pleasantly surprised at the amount of space available. Boat numbers are definitely down on previous seasons, so I am led to believe. Great news for a novice sailor like me but not good news for the Greek economy.
The Greek people seem subdued and confused with what is happening to them and their country. I have made good friends with a local restaurant owner and a dentist. Panos, who owns a restaurant near a marina I frequent, and that does very well, is moving to Sweden at the end of the year having had enough of the uncertainty – a sentiment shared by many no doubt. Konstandina, my dentist, is also looking at openings in either the UK or the Netherlands. She chose to open her practice here in Greece because of her love for the place. However, with a young family to support, and recent events and an unclear future not helping much – she is being forced to look at other options.
As for me, well, I absolutely love the country and hope it all comes good. I have only good things to say about the people I have met: their happiness, kindness, honesty and their willingness to make me feel comfortable and accepted. My plans are such that hopefully one day, in the not-so-distant future, I will leave Greece to travel further west – though I am sure I can fit in another season or two before leaving. This happens to be the same plan shared by many a yachtie out here on the water, most of whom never left and have been sailing here for upwards of 10 years…so we’ll just have to see what happens!” 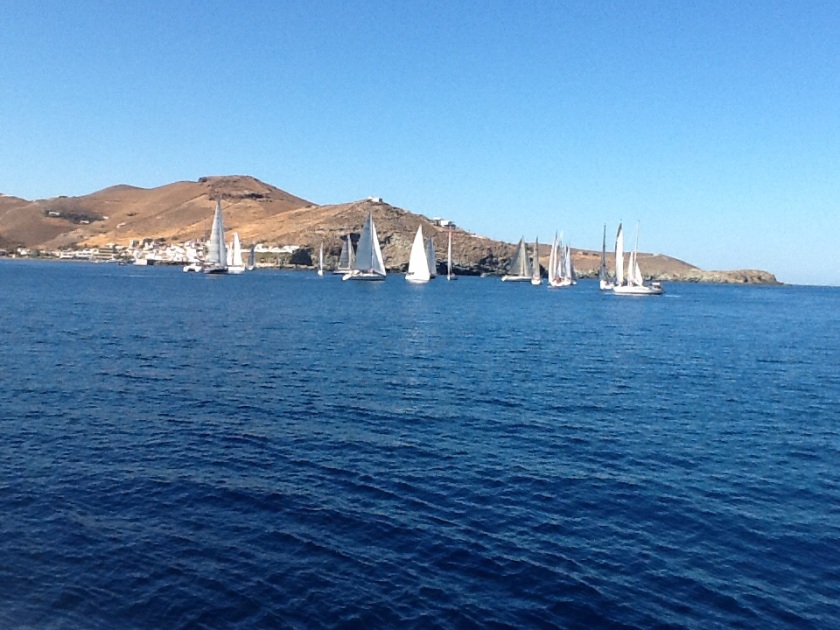