Something there is that doesn’t love a wall,
That sends the frozen-ground-swell under it,
And spills the upper boulders in the sun;
And makes gaps even two can pass abreast.

The great Chinese wall – it’s been on my bucket list for ages. 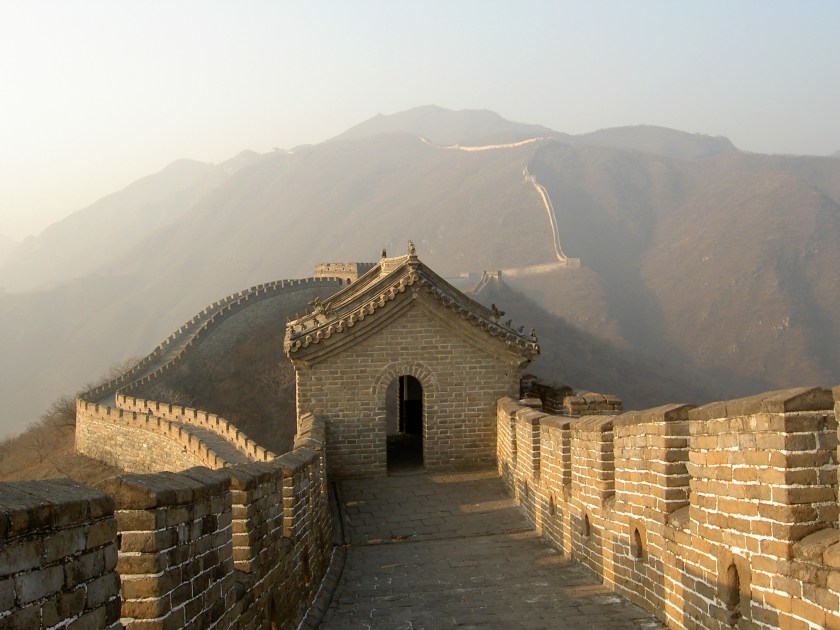 Walls protect, from the wind, from predators. They were used to defend cities. They retain mountains from sliding down, or rivers from flooding their banks, or the sea from encroaching on the land.

But walls can also be divisive.

In Berlin after the war, people woke up one morning to find out they’d been cut off from their neighborhood.

On a visit to Cyprus some years ago, a friend took me down a busy road lined with shops and cafes where people sat having a drink and a chat. Shockingly, the road was blocked by a wall cutting straight across it – a wall on which was written OCCUPIED TERRITORY. A guard stood watch on top, holding a machine gun. My friend said: ‘Our house was a hundred meters further down this road. We lost our house and half our friends, who were Turkish Cypriots.’ Interestingly, a few years later when the crosspoint was partially opened, they went to visit their old house, and the people who’d taken it over – complete strangers – gave a party for them. Which made me think that, for the amount of suffering caused to both sides by a political maneuver, there was zero benefit.

Governments continue to build this kind of wall. The kind of wall where people are always trying to get to the other side. After the fall of the infamous Berlin Wall, there were about 16 walls blocking borders around the world. Today there are some 65 walls, built or under construction, according to researcher Elisabeth Vallet of Quebec University.

History has shown us that there are always those who wish to expand their borders to include additional territory, and those who wish to close them to preclude immigration. Today more walls are being planned to keep out migrants. Donald Trump wants to build a wall to stop the Mexicans. Soon, at vast expense (around $3 million), there will be a new wall in Calais, France: it might protect the trains and the road, but will it stop migrants from getting into the UK? There is always another road, another way…

58 thoughts on “A short meditation on walls”