The English call it aubergine, the Americans eggplant. We call it melitzana. Well, apparently this glossy purple vegetable has now outpaced kale, avocado and broccoli to become the new ‘must’ in healthy eating.

Aubergines have always been a favorite in Greek cuisine. Fried crispy and sprinkled with salt, they make a delicious (if not super-healthy) starter in tavernas.
Braised with tomatoe and onions they become imam bayildi, a recipe we share with all our neighbors in the eastern Mediterranean: the name in Turkish means ‘the Imam fainted‘ – presumably due to the deliciousness of the dish, or, in another version, because he was horrified at the amount of oil used to cook it. An old folktale relates that an imam married the daughter of an olive oil merchant, whose dowry consisted of twelve jars of the finest olive oil. Each evening for twelve days, she prepared for him a succulent eggplant dish with tomatoes and onions; but on the thirteenth day, no dish appeared at the table. When informed that there was no more olive oil, the imam fainted.

Puréed and paired with stewed beef or lamb aubergines make the ultimate comfort food, Hünkar Beğendi, an inheritance from the Ottoman cuisine. There are two different stories surrounding the name of this dish, which literately translates as “the Sultan liked it.” The first one is that the dish was created for Sultan Murad IV (1612-1640) – either in the palace kitchens or in the kitchen of a house where Murad IV spent a night on his way back from a hunting trip – and he adored it. The second rumor is that the same dish was served to Empress Eugenie, the wife of Napoleon III, in Sultan Abdülaziz’s Beylerbeyi Palace in 1869, and she liked it so much that Abdülaziz promised to ask his chef to give Eugenie’s cook the recipe, something he was reluctant to do!

Layered with other vegetables, and topped with béchamel sauce, aubergines make up the ubiquitous moussaka. Another version is the very popular Italian melanzane alla parmigiana.

All the above recipes, though delicious, are hardly the stuff of a ‘healthy’ diet. For simpler dishes, try melitzanosalata (eggplant dip), a Levantine dish known in the Middle East, where they add tahini, as baba ganoush. The Arabic term means “pampered papa” or “coy daddy”, perhaps with reference to a member of a royal harem.
Aubergines soaked in ice water (otherwise they absorb too much oil) and gently braised in a covered frying pan with a clove of garlic, then sprinkled with basil leaves, make the ideal vegetarian lunch or an accompaniment for meat or chicken. 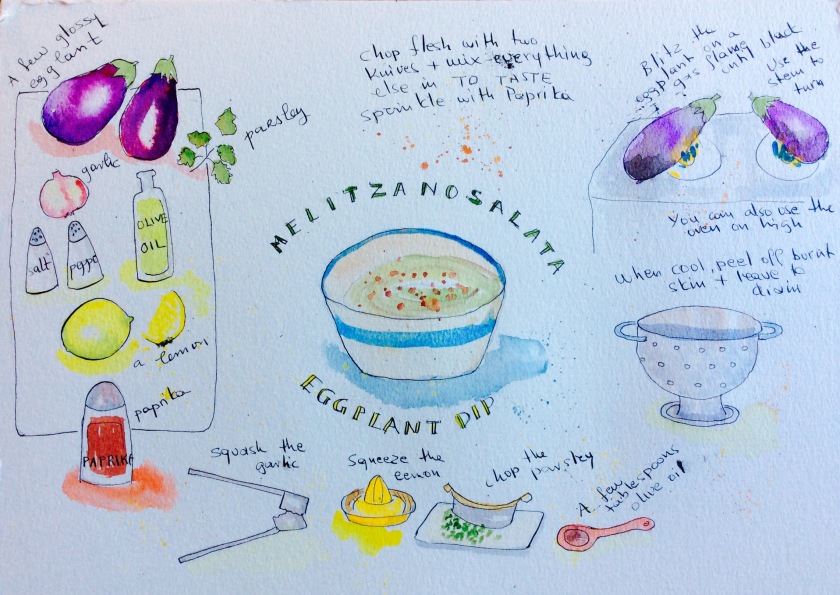 So, how healthy are they?

Purple fruit and veg in general – think beetroot, blueberries, plums, red cabbage – are beneficial because the anthocyanin that provides their colour is a powerful antioxidant. Aubergine skin is also high in phytonutrients and chlorogenic acid.
Aubergines are an excellent source of dietary fibre, of vitamins B1 and B6 and potassium. In addition they’re high in the minerals copper, magnesium and manganese.

Aubergines are a member of the nightshade family; centuries ago, the common eggplant was referred to as “mad apple” due to belief that eating it regularly would cause mental illness. The vegetable produces glycoalkaloids, bitter compounds which are there to defend plants against bacteria, fungi, viruses, and insects. Glycoalkaloids are found throughout the plant, but their concentrations are especially high in leaves, flowers, and unripe fruits. They are known to overstimulate the nervous system, and have had deleterious effects in laboratory animals, however they are found in aubergines only in negligible amounts. So they are pretty safe to eat.

As to their relative merits, I think all vegetables are good for the health as well as delicious, so it boils down to a matter of taste.