As the year draws to an end, many among us are reflecting how happy we’ll be to see it go. It has been a very turbulent year, to say the least. A violent year, too, full of wars, terrorist attacks and mass shootings. The situation world-wide is precarious, with Europe teetering after Brexit and America about to embark on a potentially dangerous adventure. Elsewhere, dictators and virtual dictators rule. In the third world, populations are exploding, without the backup to ensure all these people can be fed and employed, thus making the immigration question loom ever larger.
Whether due to man-made climate change or natural causes such as storms on the sun, weather has been both strange and excessive. Floods, earthquakes, tempests and unseasonal heatwaves have been wreaking havoc in many places.

The distribution of wealth is also out of control. Disproportionately huge sums are being earned by some (even, shockingly, by people who work for charities) and spent at art auctions, on racehorses, yachts and other luxury items, while the middle classes are struggling to maintain a reasonable standard of living. Many public institutions are going bankrupt, perhaps because funds have been squandered or misappropriated for years. It is always disturbing to see people sleeping in the streets next to luxury shops in the capitals of the western world – and apparently now 25% of the population of Europe faces slipping below the poverty line. A quarter of the population – it seems incredible. 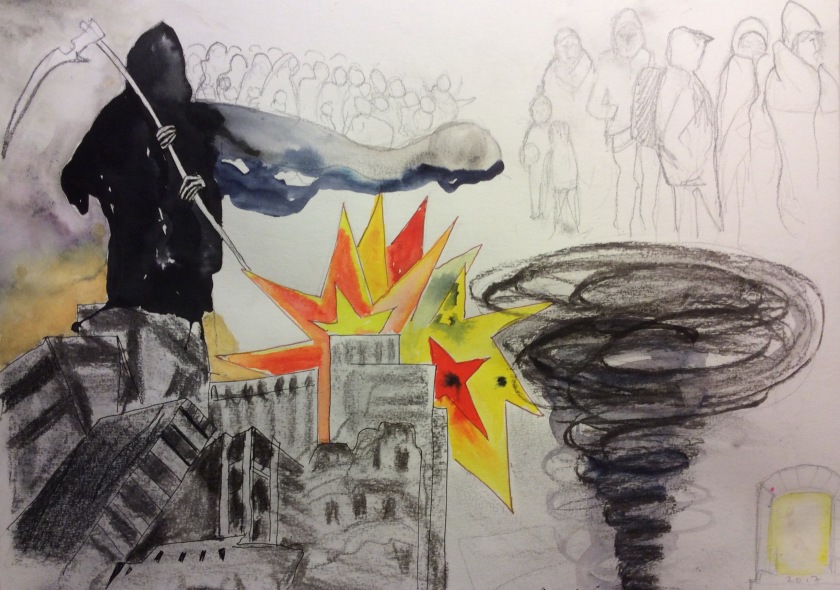 In Greece, this number is 35%. Between the incapacity of the government and the misguided (self-interested?) handling of the European ‘lenders’, I feel things are going from bad to worse. I see no incentives given for a re-start of the economy, and measures taken to combat corruption and bolster institutions are implemented extremely slowly.

The refugee crisis also remains acute – and will continue to do so, as long as wars and atrocities do not abate. The situation of most of these people is dire – and, because they need to survive somehow, microcosms are formed with a dynamic of their own (for example, the Jungle in Calais) which pose problems to the host country and can only be dismantled at huge cost to all involved. It is frightening to think of the future (or lack of) faced by so many children on our planet in the 21st century. Displaced, dispossessed, uneducated – in a time where normally health and opportunities have improved and should still be improving.

Another worrying development is a rise in intolerance related to immigration but not only. I was shocked to read the following excerpt, from an article in UK newspaper The Daily Telegraph: “Some of Britain’s leading universities are becoming no-go zones for Jewish students because anti-Semitism is rife, the first ever higher education adjudicator has claimed. Baroness Deech, a cross-bench peer, said that institutions may be failing to combat hatred against Jews because they were “afraid of offending” potential benefactors from Gulf states.”
I will make no comment on the above.

This year has also been catastrophic for the music industry and its fans and followers, with the deaths of such icons as David Bowie, Prince, George Michael, and Leonard Cohen, to name the most prominent. Also of other bright names, such as actors Alan Rickman, Carrie Fisher and Gene Wilder, as well as Mohamed Ali, Fidel Castro and astronaut John Glen.

However, the year cannot have been all bad – or bad for everyone. There were successes (for example, I don’t think Usain Bolt is complaining), babies born, art and music made, things built. When I Googled ‘Good things that happened in 2016’, I got the following:
– A few animals came off the endangered list (however, quite a few others went on, so I don’t know how it balances up.)
– A solar powered plane circumnavigated the world.
– A number of scientific advances were made (especially in curing disease), including the 3-parent family (look it up, guys!)
– 70,000 Muslim clerics declared a fatwa against ISIS (about time, I should think)
-AND….wait for it…there was the launching of Pokémon Go! I joke not – this was mentioned on various sites as a major event of 2016…

This was my – no doubt biased – view of things. But maybe some of you can add to the list?

Above is a painting I’m doing for the December ArtDare which is set by RISD professor Clara Lieu at art.prof. The theme is ‘2016’. I’m trying to portray the year as I saw it – troubled and violent, as I said above. Still a work in progress.