And Nils, her brother. 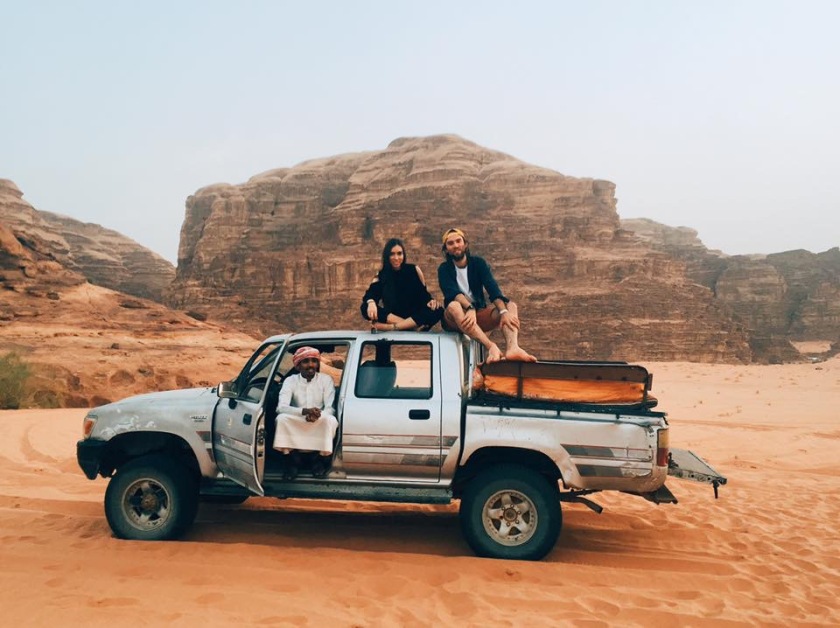 The O’Hara siblings used to work, respectively, in fashion and advertising. Then they visited the Jungle, a large refugee camp near Calais. They’d been hearing little bits about it, mostly about how it was affecting holiday makers by delaying the trains going across the English Channel.
They became interested, because their parents were already involved in the long and complicated process  needed to foster a refugee. Since it wasn’t so far from their home in Kent, they decided to go over for the day and take a look.

Two years later, they have acquired two new brothers, one of whom comes from Eritrea and the other from Afghanistan. And they have founded the Worldwide Tribe.

The first time they visited Calais, there weren’t many volunteers about yet. They were, of course, shocked by the conditions there, and by the fact that there weren’t many people helping at all. However, what made the greatest impression, was, in Nils’s words, ‘How nice and welcoming the refugees were to us. Everyone wanted to share what little they had, to feed us and make us tea.’ People were polite, smiling, and full of optimism. The siblings went home, feeling very emotional about what they’d seen, and Jaz wrote about it on her Facebook page. The post went viral. Overnight, people started sending donations, both physical and monetary. In a short amount of time, they’d gathered a lot of clothes, shoes and food, as well as money.

Jaz and Nils soon realized that in the long run they weren’t best placed for managing warehouses and dealing with the distribution of donations – others were better at it. What they felt they were good at was telling people’s stories. They started diverting donations and volunteers towards other organizations, and they created the Worldwide Tribe.
They see their organization not so much as a charity, but as a platform for people to share their stories.

Jaz concentrates on content creation and writing, setting up talks in schools and universities and organizing different events. Both siblings manage the production of documentaries, of which the latest is the film DIASPORA.

Meanwhile, Nils and two friends have been setting up WiFi in camps. This is very important to refugees as it is the only way they can keep in contact with what’s left of their families, and also get information about their status, prospects, etc. This activity has resulted in the creation of a product which has generated commercial interest, which they believe has the scope to get bigger, and maybe result in the generation of funds towards their projects.

I was curious about the two boys the O’Hara parents are fostering. One, Mez, comes from Eritrea, which he fled because his only choice was to spend his life in the Army, where his brother already is. Having arrived in England aged 14 speaking not a word of English, he has now done all his GCSEs and is heading to college. He still has family in Eritrea and keeps in touch with them. In the beginning things were difficult because the cultural differences are huge but he managed to adapt quite quickly and has done ‘incredibly well’, according to Nils.

The other boy, Arash, is Afghani. He saw some of his family killed before his eyes, has lost all contact with them and doesn’t know if his mother is still alive. Speaking to Nils, I found it hard to imagine how difficult it must have been for this family to open their home – and how ultimately rewarding. I asked Nils how the two got on and he laughed and said: ‘They get on OK – but they are classic teenage boys.’

The O’Haras’ vision for the Worldwide Tribe is to inspire as many people as possible to share and contribute in any way they can, whether by volunteering, sharing a post or just talking about things. They hope this will create change from the ground up, while pointing out that their platform is not at all political.

Nils hopes the WiFi project will take off – if they manage to commercialise the product, it will earn money they can then plough back into the Worldwide Tribe, to help more people across Europe and the Middle East.

I asked Nils if it was hard to keep positive at all times. His answer was that they do see a lot of misery and it’s difficult not to take it home. What helps them is that although they spend a lot of time in the camps, in Greece, Turkey and Lebanon, they are not there all the time, so they manage to get some distance. Of course, they have seen bad things, and violence, but they have mostly been inspired by the positivity and humanity they encounter. They feel they’ve learned a lot and are awed by the human spirit, and the incredible stories they’ve heard. They are amazed by how people in such difficult circumstances keep trying and finding resources, and they reckon the experience has generally been far more positive than negative.

You should go on their site, and read some of the incredible stories there.  Such as the one about Noor, who’s in a wheelchair but is determined to become a judge, or Besh, who, with his four younger brothers, searched practically every refugee camp in Europe to find his mother, and then miraculously located her in Dunkirk. You can also follow Jaz on Instagram or Facebook.

18 thoughts on “The Worldwide Tribe”