Taking advantage of a couple of days in London a few weeks ago, I tried to fit in as many art shows as possible. After the Gormley exhibition at the Royal Academy, I went to see the works of William Blake at Tate Britain.
When I was in school, I found Blake’s poetry a little grim, if not downright creepy: O rose, thou art sick… etc. But I was always intrigued by any accompanying illustrations, so seeing them in the flesh is always a real treat. 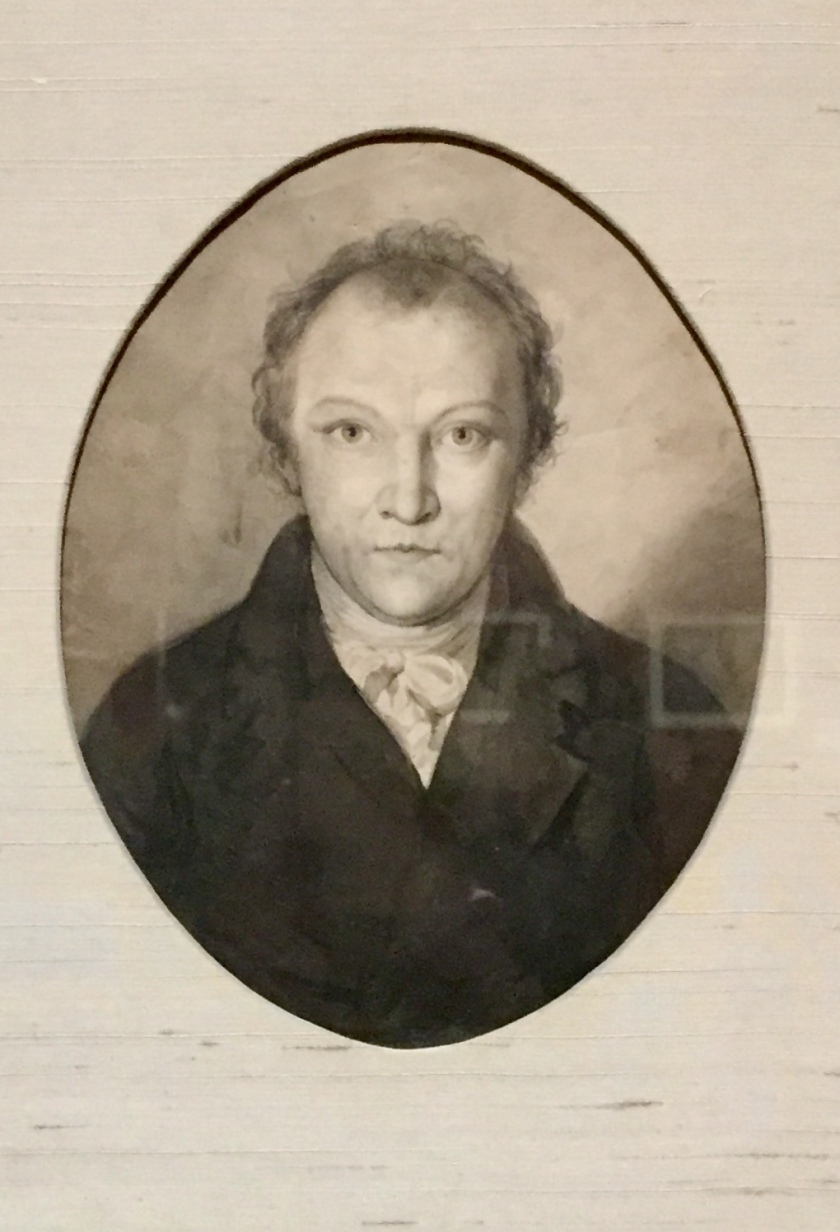 William Blake (self portrait above), born 1757 – died 1827, was an English poet, painter, and printmaker. He lived most of his life in London, at a time of great political and sociological change which greatly influenced his writing. He was largely unrecognised during his lifetime, but is posthumously considered one of the leading lights of English Romanticism. 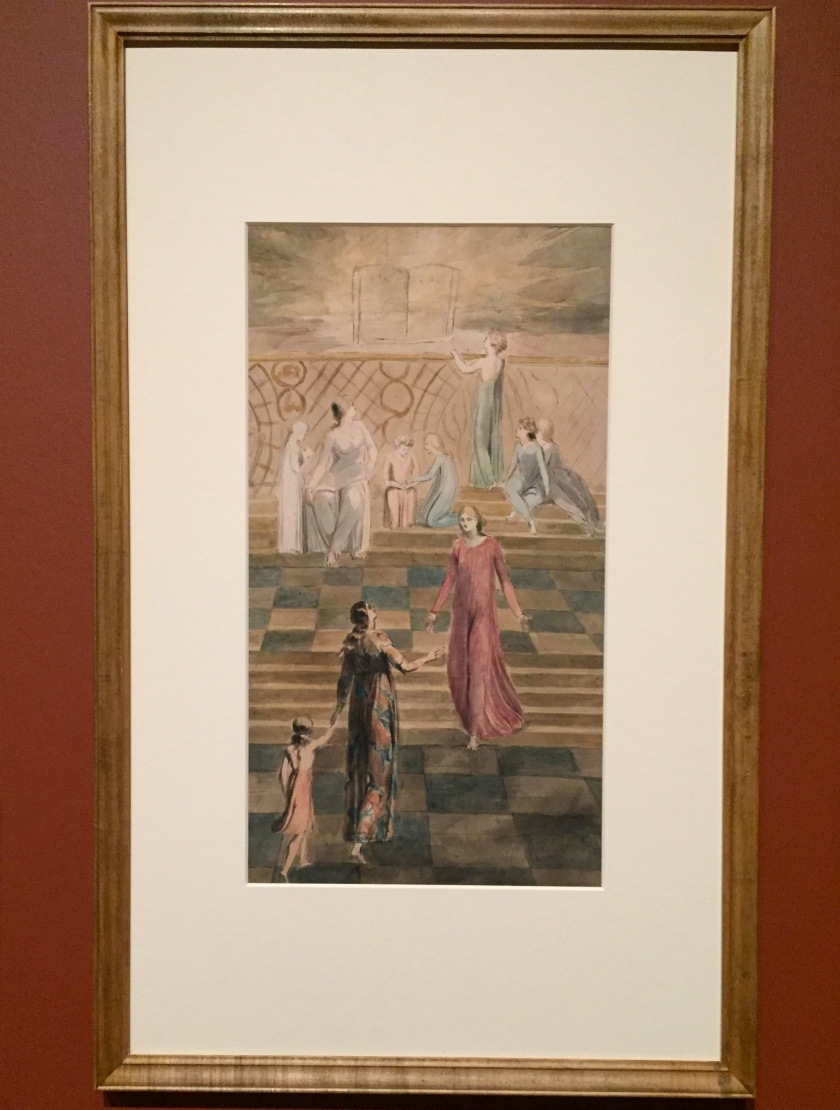 The painting above is ink, graphite and watercolor, and has been named An Allegory of the Bible, which is not the artist’s title. The Bible, however, was always an inspiration for Blake, and in this composition he has started using more color than previously. 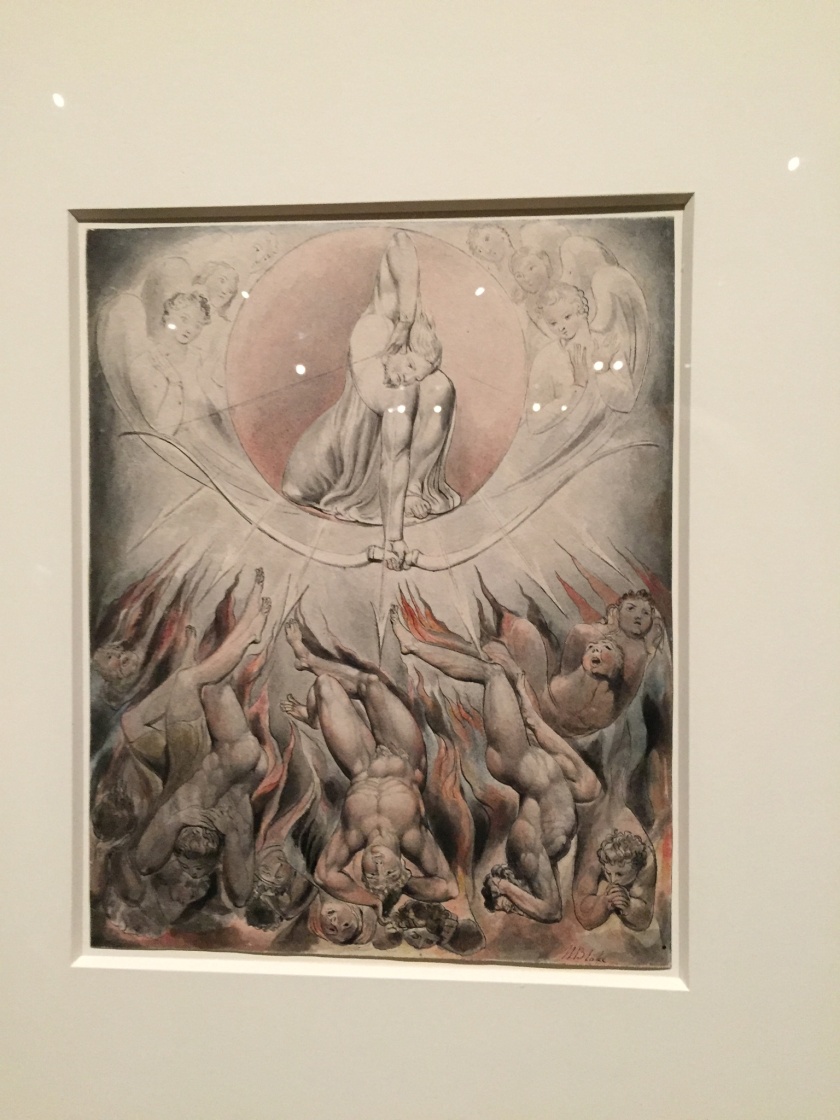 Blake was born into a modest family who, happily, encouraged his artistic leanings. He eventually went to work as an engraver, and at the age of 31 developed relief etching, a method he used to produce most of his books, paintings, pamphlets and poems. The process is also referred to as illuminated printing; however, for his commercial work, Blake mostly used the more common intaglio engraving. He is a master of composition, as can be seen in the painting above. He also used oils, as In the painting below. 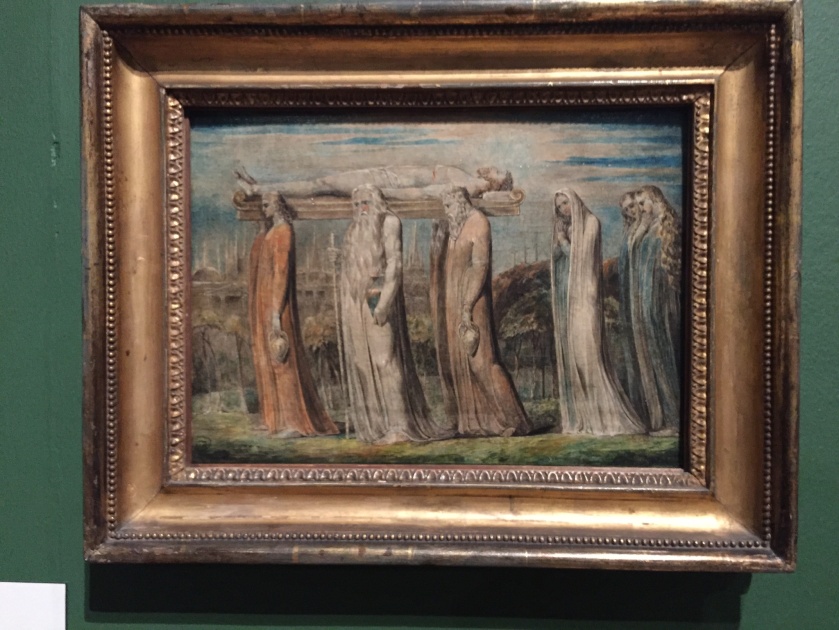 Between 1793 and 1795 Blake produced a remarkable collection of illuminated works that have come to be known as the Minor Prophecies, in which he examines the fall of man. In Blake’s mythology man and God were once united, but man separated himself from God and became weaker and weaker as he became further divided. 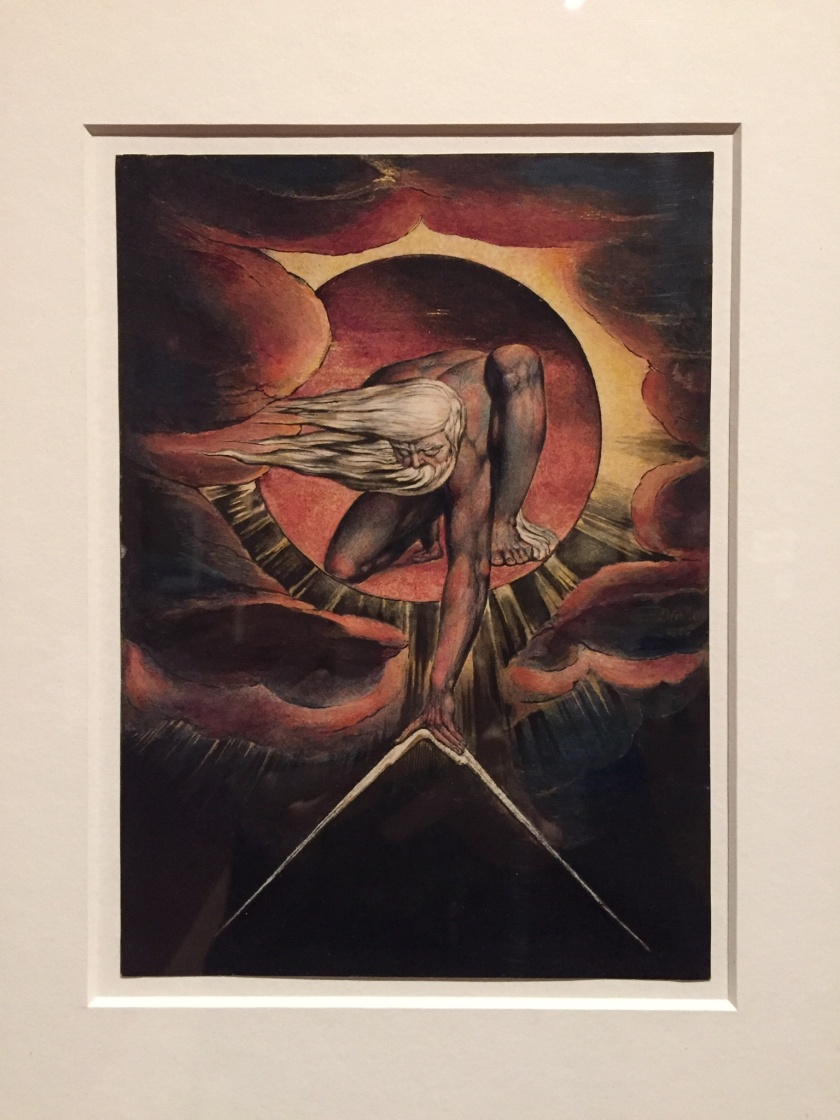 One of the best known paintings from this series is the one above, which, though small, is very powerful. Its central figure is Urizen, who, measuring the world beneath him with his golden compass, represents the scientific quest for answers. For Blake this action was a threat to what he thought of as the cornerstones of human happiness: imagination, creativity and thought. 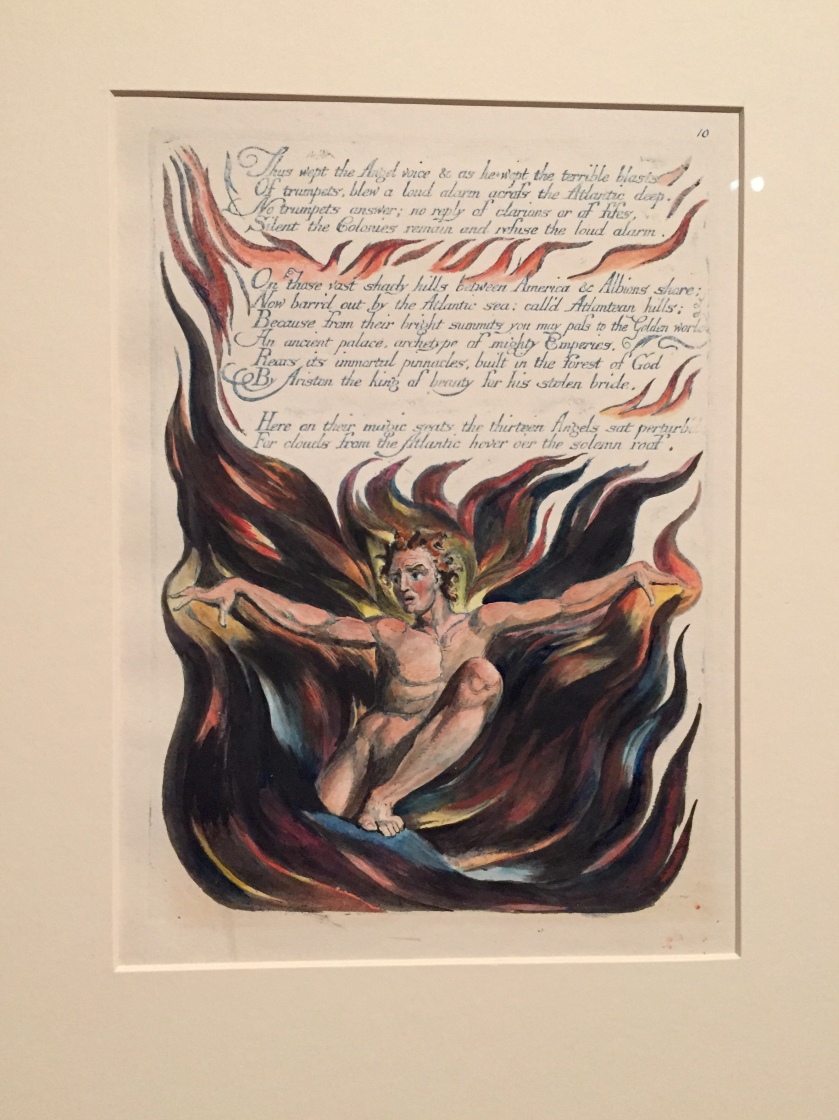 Blake must have had fantastic eyesight to be able to spend hours writing out his poems in minute script before illuminating them. Blake also illustrated other people’s work, such as Thomas Grey’s lovely ‘Elegy written in a country churchyard’. 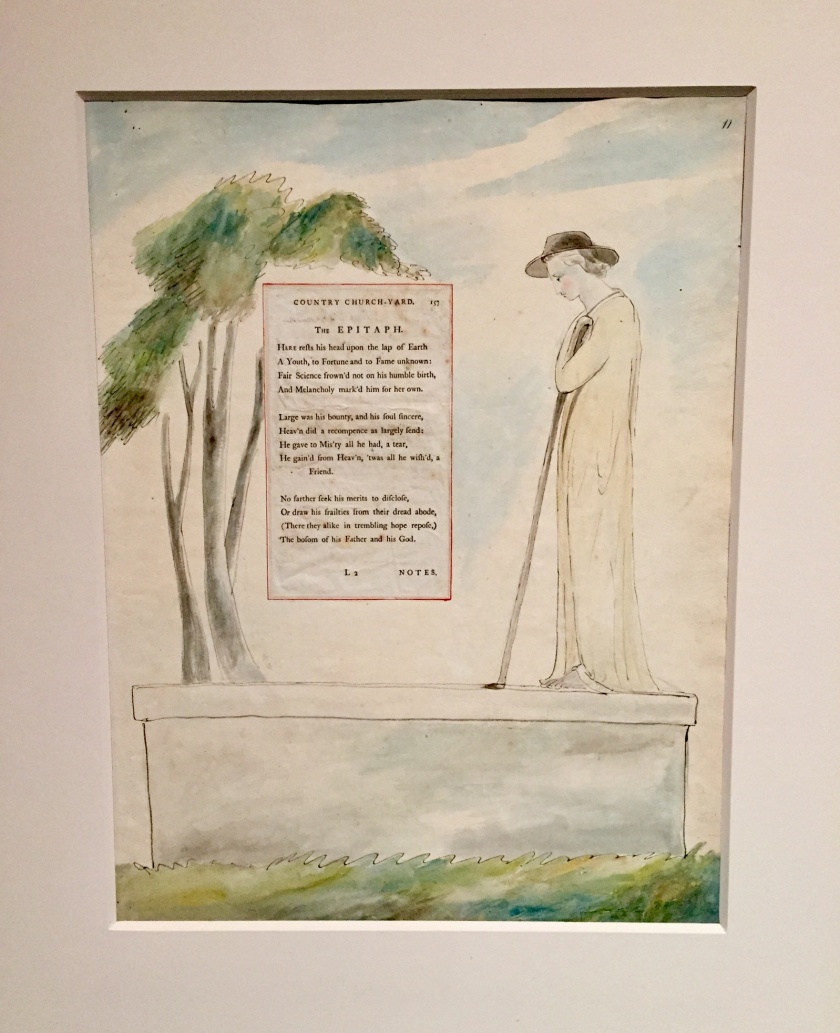 And his engraving of Chauser’s The Canterbury Tales remains probably the best known image on this subject.