Did you know it’s possible to ski in Greece? Yes, we are not just about idling on the islands – we have beautiful mountains, too. When I was in high school, a bunch of us used to climb onto the Mountaineers’ Club bus on a Friday afternoon in winter. After five or six hours, including a stop in Volos for bougatsa, a cream-filled pastry, we’d arrive at the parking lot on Mount Pelion. From there it was a mere 25′ walk in the dark along a snowy track, carrying backpack and skis, to the refuge. Us kids would hurry along, so we’d get there first and grab a room with no ‘oldies’ in it. Next morning, we’d ride up on the t-bar and snowplow down the slope in a row, arms linked, in order to ‘groom’ the piste, so proper skiing could commence. Evenings were spent singing along to someone’s guitar and playing board games. There was no way of ringing home – our parents saw us again on Sunday night, when they came to collect us off the bus. I wonder how many parents would be ok with this nowadays?

Now, of course, it’s all properly organized, with chairlifts and snowplows and instructors. And the beauty of it is that in the early spring, with a bit of luck, you can ski and swim on the same day. Ski in the morning on Mount Parnassus, then, when the sun turns the snow to soup, drive down the mountain and go for a swim in Galaxidi bay. The same can be done on Mount Pelion and the Aï-Yannis beach.

If anyone’s interested in doing that, or even just skiing with a view of the sea, or hiking in the Greek mountains, Christian Mayer, an official at Germany’s Federal Ministry of Finance who spent more than three years based in Athens, has written a book with all the necessary information on how to go about it.

After climbing Mount Ziria one summer in order to escape the Athens heat, Mayer, a skilled skier, got acquainted with Greece’s mountaineering community, making friends with people who had the same interests and exploring the Greek mountains extensively. He kept a journal, and eventually he turned his notes into a book, Ski Touring With Sea View, with beautiful photographs and detailed descriptions of 23 routes on the Greek mountains. 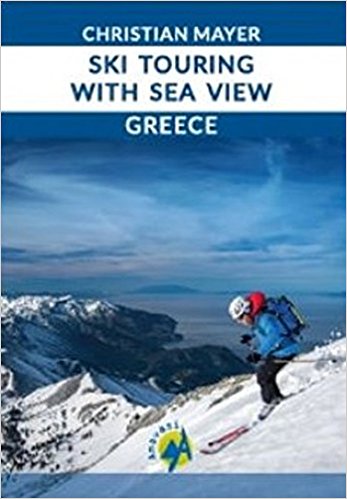 As well as being a great guide for skiing, the book is useful for summer hikes.  It contains practical information about the different locations, such as maps, starting points, mountain refuges or other places to stay, altitudes, potential dangers like a risk of avalanche and necessary attire.  It also seems refuges and tavernas mentioned therein and will give you a 10 percent discount if you have the book with you!
A must for everyone who loves mountains and wants to explore Greece. Amazon link

12 thoughts on “Skiing with a view of the sea”